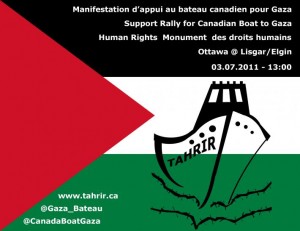 Canadian Boat to Gaza’s vessel, the Tahir, is one of several ships attempting peacefully to end Israel’s illegal blockade of Gaza. Tahir is a part of Freedom Flotilla II, sponsored by groups from Belgium, Denmark, Australia, United States, France, Spain, Italy, Ireland, the U.K, Greece, Turkey, Malaysia, and more.  The Flotilla aims to travel to Gaza with approximately 10 vessels including both passenger and cargo ships carrying humanitarian aid.

We have just received word that the Greek coast guard has boarded Tahir in an effort to prevent it from sailing. The attached news release provides more information.

Peace Alliance Winnipeg is one of many organizations in the city that supports the aims of Canadian Boat to Gaza. We will keep you informed as the situation unfolds and encourage you to participate in any solidarity actions that are organized over the next few days.

The blockade of Gaza reaches the shores of Greece!

As it attempts to sail, the Canadian Boat to Gaza, the Tahrir, blockaded in Greece

Greek coast guard are now on board the Tahrir attempting to arrest Sandra Rush, Jewish Canadian member of the Canada boat to Gaza Steering Committee, who is refusing to surrender boat’s registration papers.

Efforts to stop Freedom Flotilla 2 – Stay Human from sailing have included diplomatic pressure and manipulation, economic blackmail, bureaucratic obstacles, baseless and slanderous allegations against the flotilla and the delegates, and sabotage of at least two vessels.

“The world watched as an intensive campaign to prevent the Tahrir and the entire Freedom flotilla II from sailing was underway.  We have been unjustly and duplicitously treated.” said Irene MacInnes of the Tahrir organizing committee. “The government of Israel, shamefully with the tacit support of the Harper government, is doing everything in its power to maintain the blockade. Today, as a result of the concerted efforts of the 4th largest military power in the world and its backers, we have been prevented from sailing to Gaza. Yet we will persevere in our attempts till the blockade is lifted.”

“Israel has in effect extended the illegal blockade of Gaza to Greek ports, using the Greece’s economic difficulties to influence the government’s position”, said David Heap of the organizing committee.

“We remain absolutely clear that the Canadian Boat to Gaza has not been, is not, and has no intention of, breaking any laws. It is the blockade of Gaza that is illegal under international law. We have a legal and moral obligation to challenge the blockade, given the failure of the international community to act”, said Dylan Penner of the organizing committee. “This is why we must continue our attempts to sail to Gaza: to challenge the illegal and immoral blockade and to equally challenge the Canadian federal government’s support for it.”

Meanwhile the US boat to Gaza, The Audacity of Hope, is at a standoff with the Greek Navy boats, refusing orders to return to shore.

For biographies of delegates aboard the Tahrir visit: www.tahrir.ca/content/delegates-board-tahrir

UPDATE: Canadian Boat to Gaza is urging that Canadians contact the governments of Canada, Greece and Israel. You can get contact information and sample messages here.

← Jimmy Cliff: Stop the war in Afghanistan
Support the Canadian Boat to Gaza →