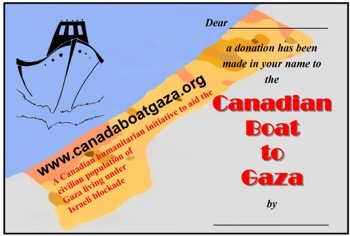 The Canadian Boat to Gaza initiative continues to be a target for a smear campaign that has little regard for law or facts. Rather incredibly, the executive of the University of British Columbia’s Alma Mater Society has subjected a routine donation for our campaign from the student Social Justice Centre to an “investigation” into potential “links to terrorism” A final decision on this so-called investigation is expected at the January 12 AMS meeting.

This episode in part reflects the growing desperation of those who seek to justify Israel’s ongoing collective punishment of Gaza. Exactly two years ago, the world’s eyes were opened to Israeli brutality during a three-week attack on Gaza that claimed more than 1,400 lives.

The question as to whether bringing humanitarian aid to Gaza can be viewed as legally constituting “support for terrorism” was resolved earlier this year by the Canadian Federal Court. On September 27, Mr. Justice Richard Mosley ruled unequivocally that it cannot: to consider humanitarian aid as “terrorism” would be to void the term of all meaning.

More importantly, our campaign follows the imperatives of international law, which our politicians have conveniently forgotten. The International Committee of the Red Cross (ICRC) has issued a very clear statement on the subject: “The hardship faced by Gaza’s 1.5 million people cannot be addressed by providing humanitarian aid. The only sustainable solution is to lift the closure.”

We have no illusions about the amounts of aid we can bring to Gaza, nor the amount of trade goods our modest vessel will be able to export, yet this aid will still have a significant impact on the suffering of the Palestinians of Gaza.

The significance of the international Freedom Flotilla movement is not in the amounts or types of goods we manage to bring in or out of Gaza, it is in challenging the blockade itself. Because it collectively punishes a civilian population, the blockade is clearly illegal under international law, specifically the Fourth Geneva Convention.

Because the blockade is illegal, opposing it is a moral duty for people of conscience everywhere. Our campaign involves over 100 grassroots groups from across Canada and thousands of large and small individual donations, responding to the cry for help from the Palestinians of Gaza to take decisive action, where government and state agents have failed them.