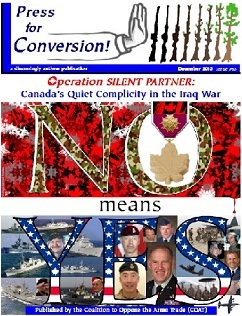 By Richard Sanders, Coalition to Oppose the Arms Trade

In March 2003, when the Liberal government declared that Canada would not join the US-led “Coalition of the Willing” against Iraq, most Canadians were  understandably proud. Unfortunately, it was a smoke-and-
mirrors game to deceive the Canadian public.

Canada did join the Iraq war and has contributed in many significant ways, including warplanes, warships and 2,000 military personnel—mostly sailors. However, this complicity has gone largely unnoticed.

On March 18, 2003, then-U.S. Secretary of State Colin Powell announced: “We now have a coalition of the willing…who have publicly said they could be included in such a listing.” More significantly, Sec. Powell then went on to reveal that: “there are 15 other nations, who, for one reason or another, do not wish to be publicly named but will be supporting the coalition.”

Canada’s notable absence from the U.S. list of “willing,” publicly-admitted participants in the Iraq war, coupled with the Liberal government’s profuse political rhetoric, was accepted as evidence of Canada’s supposed refusal to join this highly-unpopular war.

Many Canadians—including some peace activists—fell for the government’s ruse. As a result, Canada’s substantial yet furtive participation in the Iraq war has remained largely unknown. By unlearning the mistaken belief that Canada stayed out of the Iraq war, we may be able to prevent similar fiascos from being repeated.

This is the introduction to Operation Silent Partner: Canada’s Quiet Complicity in the Iraq War, Issue #65 of Press for Conversion, published by the Coalition to Oppose the Arms Trade. Read more, here >>>.

← Yves Engler: How Canada lost its bid for a UN Security Council Seat
Canadian Boat to Gaza campaign is legal, ethical, and necessary →