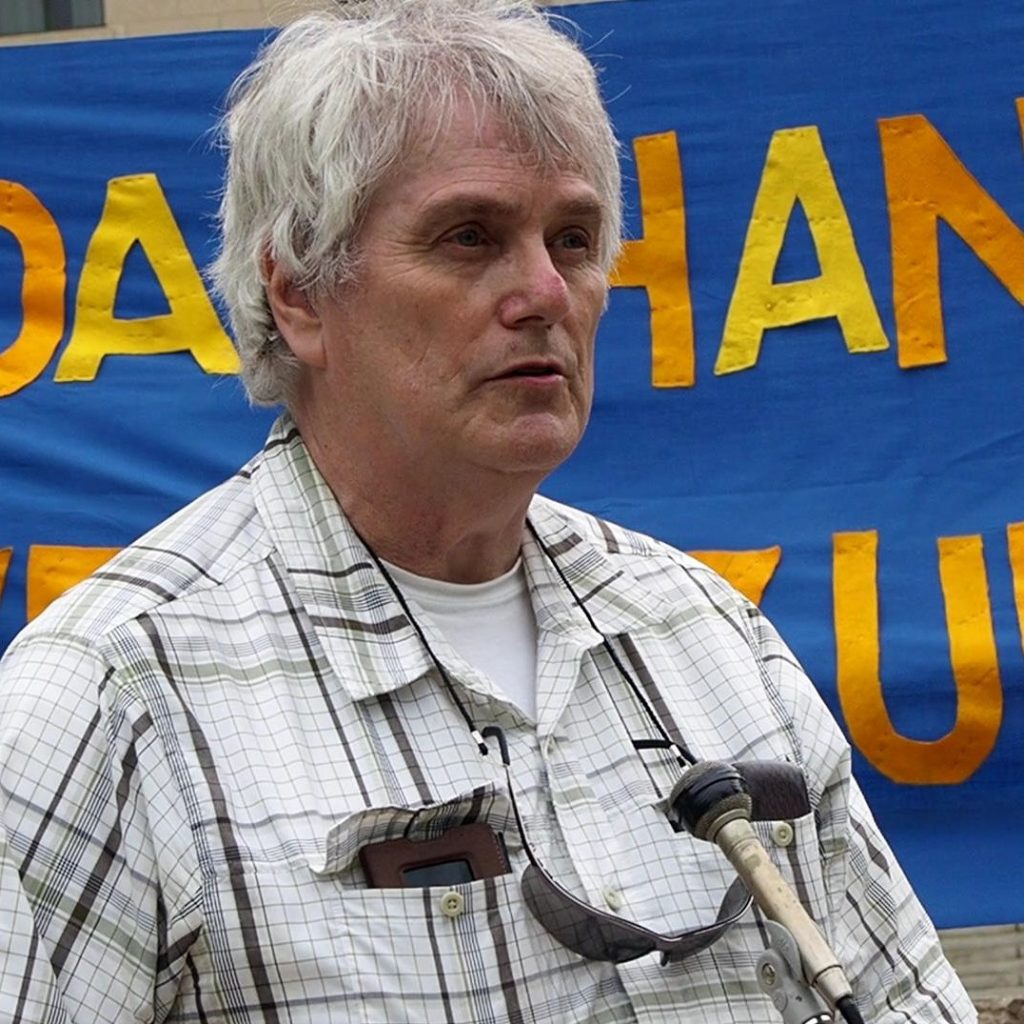 Thank you to Canadian Foreign Policy Institute for organizing this webinar at such a critical time. I say this is a critical time because efforts to stop the war and secure a space for diplomacy and peace negotiations is vital if we are to prevent this war from growing in scope to involve NATO.

I am participating in tonight’s panel both as a peace activist and third generation Ukrainian Canadian.

Our discussion tonight is important in mobilizing public opinion against the war and the urgent necessity to end it. Public opinion at this point is being bombarded with the images and suffering of war. I see no substantial narrative to end this war and the suffering it is causing. I especially don’t see it in our politicians with the exception of a few lone voices.

In terms of the war now raging in Ukraine and how wide this war may grow Canada bears significant responsibility – as do all the countries of the NATO alliance.

Until the war broke out the people of Ukraine were treated as pawns in the overarching and long standing confrontation of NATO with Russia as NATO expanded eastward. This is in addition to the eight years of civil war endured in East Ukraine following the violence of 2014 in what some call, including the Deputy Prime Minister of Canada, the ‘revolution of dignity’. That civil war resulted in an estimated 13,000 dead, 30,000 wounded and 1 million people displaced from the conflict zone into Ukraine and Russia.

Before this war – the victims of the civil war were forgotten and this continued as tensions rose in January and February of this year. The OSCE began to report a record number of cease-fire violations in the Donetsk and Luhansk regions. I don’t recall any statement of Canadian Foreign Affairs or any debate in Parliament for a ceasefire in those regions. During the 8 years of civil war Canada’s response was not to find solutions but to better arm and train the Ukrainian military as part of its alignment with requirements for admission to NATO.

It is not possible to give a full picture of the influence of the Ukraine right wing in Canadian political decision making in a short space of time. However, its history and role is very well documented by Richard Sanders and I would encourage you to check out his work. The main vehicle for this influence is the Ukrainian Canadian Congress. The UCC is an organization of the Cold War and the impetus for its formation was the Canadian state as it took up politics of the Cold War. The UCC and the Canadian state share the cold war politics of the past and present. And, of course, of special significance to the influence of the UCC is Chrystia Freeland and her links to the UCC.

No surprisingly then the positions of UCC on Russia and Ukraine have driven Canada’s policy on Ukraine regardless of which party is in power. Its reach extends to include all members of parliament through the Canada-Ukraine Parliamentary Friendship Group that, according to the UCC, has a membership of over 100 MPs.

A UCC 2019 policy paper titled “Strengthening Canada Ukraine Defence and Security Relations” notes “…Ukraine is the front line of our defence against Kremlin aggression” and calls for removal of Russia from the SWIFT payments system and Ukraine’s admission into NATO. The removal of Russia from SWIFT has now happened. The possibility of Ukraine’s admission into NATO remains a central issue in the war.

In the period of January and February, as tensions rose between Ukraine and Russia, Canada was a protagonist for measures to escalate tensions. At the end of January a take note debate was held in Parliament. Preceding it the UCC presented its briefing package to MPs. If one reads the Hansard of the debate what is striking is the similar language used by MPs to frame the situation as the need to confront Russia and the need to escalate measures against Russian through sanctions, providing more military aid to Ukraine and re-committing to Canada’s training mission in Ukraine.

So the relationship is pervasive and it has conditioned Canadian policy to the extent that Canada can not represent any other position than that of confrontation. In a webinar hosted jointly by the UCC and Liberal MPs representing the prairies both Ministers Joly and Freeland appeared alongside leading functionaries of the UCC. The webinar was called ‘Canada’s Role in Protecting Ukraine’. It was in late January at a time when diplomacy still had the possibility of averting war. As Minister Joly had just returned from a diplomatic mission to Europe – one that did not see her meet her Russian counterpart – you would have expected that she could have spoken about diplomatic initiatives. However, she made only passing reference to the Minsk Agreements. In the webinar both Joly and Freeland emphasized the need for hard power and confronting Russia. Chrystia Freeland spoke about Ukraine as the ‘battleground between authoritarianism and democracy’. Freeland was to emphasize this and her pride in Canada’s supply of lethal aid to Ukraine at the UCC rally in Toronto last Sunday.

In conclusion I believe there was an opportunity to avert this war. It required diplomacy and lessening of tensions. Canada and others undercut the diplomacy by escalating tensions and giving no space for dialogue. In hindsight it is as if there was a timetable to bring things to a boiling point. I look forward to the anti-war rallies planned for Sunday. We must change the course of what is happening. We must stop this war and the devastation it is bringing. We must avert the danger it poses of engulfing all humanity.

Glenn Michalchuk is the chair or Peace Alliance Winnipeg and national vice president of the Association of United Ukrainian Canadians. This article is based on his introductory remarks to a webinar sponsored by the Canadian Foreign Policy Institute entitled “Cutting through the Spin: Russia’s invasion, NATO’s provocation and Canada’s complicity” held on March 4, 2022.