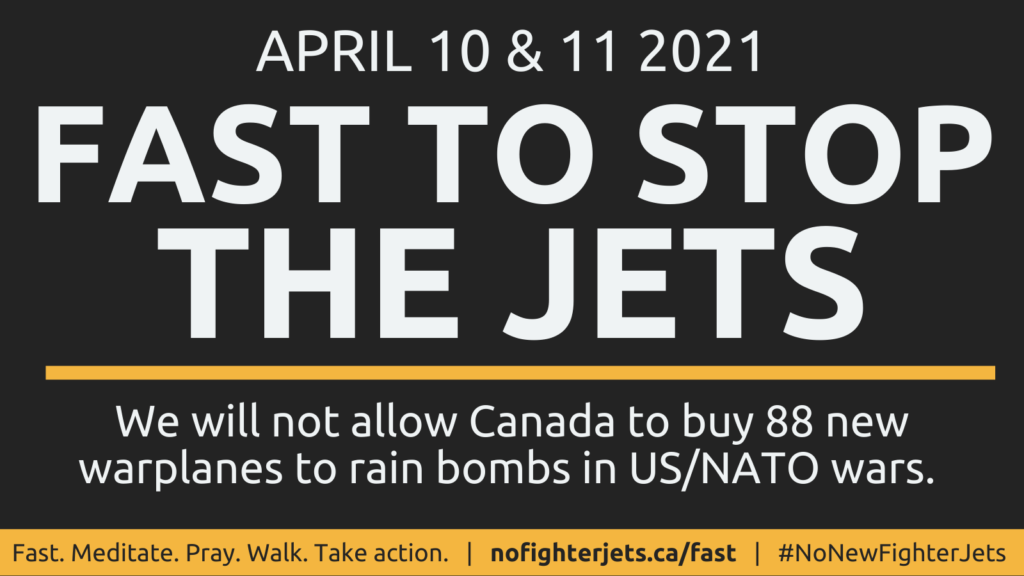 by The No Fighter Jets Coalition

The Canadian government is quietly planning to purchase new warplanes for a sticker price of $19 billion and a total cost of at least $76 billion.

We will not allow Canada to buy 88 new warplanes to rain bombs in US and NATO wars.

This new generation of fighter jets will be designed to do the same thing the last batch did – carry bombs and missiles that kill civilians (disproportionately children), destroy critical infrastructure that leaves millions without safe drinking water or electricity, and run environmentally costly training drills. This time they’ll have the added–and terrifying–capacity to carry nuclear weapons. These jets have nothing to do with ensuring security for Canada (according to former Deputy Minister of Defence) and make a mockery of aspirations of Canada having a “feminist foreign policy” and being a global peacekeeper.

Across Canada on April 10 and 11 public fasts and vigils will honour those who have been killed by Canadian war planes and reject Canada’s plans to buy 88 new bomber jets.

On April 10-11, take a stand against these warplanes by joining a (safe, socially-distanced) public fast or vigil where you live, or fasting in your home in connection with individuals around the world who are fasting in their locations in solidarity. Sign up here to receive all of the information you will need to join in.

Here’s how it will work:

April 10 will also mark the beginning of the 10th anniversary of the Global Days of Action on Military Spending: GDAMS 2021. Our fast will join this global effort to reduce spending on war.

Canada does not need to buy fighter jets, and 2021 is our critical opportunity to stop this purchase before it happens. Join us on April 10th and 11th.