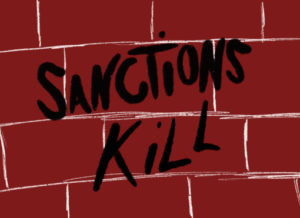 The Hamilton Coalition To Stop The War and the Mouvement Québécois pour la Paix today have issued a joint statement in response to the Trudeau government’s official reply to our parliamentary petition e-2630.

That reply was delivered by Rob Oliphant, Parliamentary-Secretary to the Minister of Foreign Affairs.

Both organizations reject the rationales given by Mr. Oliphant for the maintenance of Canada’s coercive economic measures and firmly believe that, today, the health and economic crises have only deepened in the past year since UN Secretary-General Antonio Guterres’s appeal to world leaders to drop all their economic sanctions for the duration of the pandemic. Consequently, as we did along with 100 prominent Canadians in an open letter one year ago, we call upon Prime Minister Trudeau immediately to lift all of Canada’s coercive economic measures against some twenty countries of the world – permanently.
Ken Stone of the Hamilton Coalition to Stop The War observed, “Canada’s economic sanctions are like a knee upon the necks of the people of the some of the poorest countries of the world. In view of the health and economic crises caused by the pandemic, Justin Trudeau should lift all of Canada’s coercive economic measures now and let those people breathe.”

Pierre Jasmin of the Mouvement Québécois pour la Paix noted, “UN Secretary-General Guterres was clear in pointing out that ‘we are only as strong as the weakest health system in our interconnected world.’” I call on Justin Trudeau to let Canada be an example to the world in helping the poorest countries of the world defeat the pandemic by lifting all of Canada’s economic sanctions now.”

← Fast to Stop the Jets
The dangerous situation in East Ukraine →