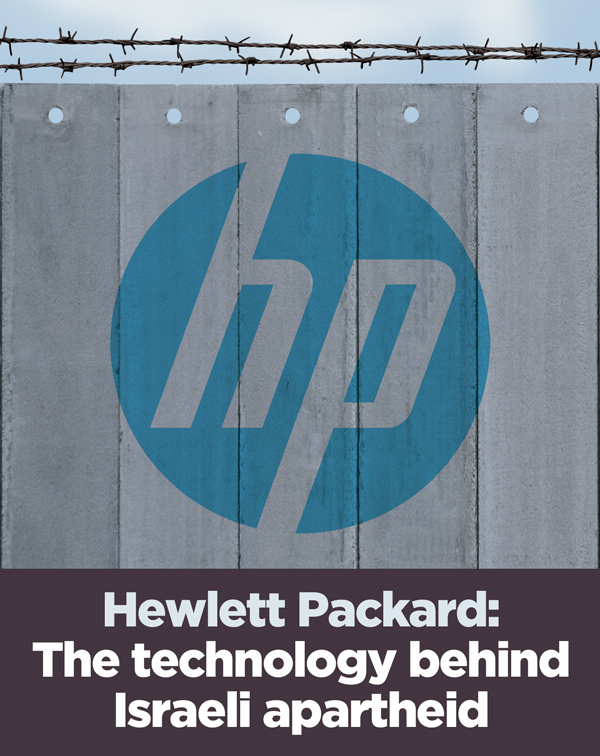 Hewlett Packard supplies surveillance and identification equipment for settlements, as well as for use at the separation wall and checkpoints which are directly linked with settlements.

A brief explanatory note: In 2015 Hewlett Packard Co. split into two corporations: HP Inc. for consumer products and HPE for corporate services. Both companies profit from contracts with the state of Israel and the Israeli military.

Opposition to HP is growing. In fact, more than 1.7 million people around the world have signed a petition calling on HP to end its role in Israeli Apartheid and settler colonialism.

The impact of HP surveillance technology is far-reaching. For example, such technology is used to control the population and Palestinians’ every day movements. This often means families are separated, adults cannot get to work and children cannot go to school. Communities are also completely cut off from access to medical care.

HP has more than 5,700 employees in Israel and is one of the Israeli military`s main information and technology suppliers.

A recent report by Public Knowledge Workshop, an Israeli transparency non-profit, found that exclusive of Israel`s defense ministry, HP has the largest number of contracts with the government exempt from tenders of any private sector entity.

Through its subsidiary EDS Israel, HP is the prime contractor of the BASEL automated biometric identification systems, which are installed and maintained by HP at checkpoints. The EDS system was first installed in 2004 at the Erez checkpoint in Gaza and is now used at over 20 Israeli checkpoints in the West Bank and Gaza.

These biometric ID systems are used to track and control Palestinian movement. Moreover, the current IDs produced using HP technology have been compared to the passbooks produced by Polaroid during the Apartheid era and used by the Apartheid government to control the movement of Black South Africans.

In terms of Apartheid-era South Africa, it is interesting to note that in 1989 HP decided to sell off its local business unit there (although it did continue to sell its computers in the country).

HP also provides titanium servers that are used to operate the Aviv system, the computerized database of Israel’s population and Immigration Authority. The Aviv system is vital to Israel’s segregation and apartheid.

The company is also the sole provider of PCs to the Israeli military.

The servers assist the Israeli government to control and enforce its system of racial segregation and apartheid against Palestinian citizens of Israel. HP also contributes to in Israeli settler colonialism through its “Yesha data base” which compiles information on Israeli citizens in illegal settlements in the occupied West Bank.

Furthermore, HPE (Hewlett Packard Enterprise) also provides the servers and technology for Israeli prisons where children are often incarcerated, tortured and held without being charged.

Hewlett Packard refutes many these accusations and the company has responded by saying in a brief statement, “Respecting human rights is a core value at HP and is embedded in the way we do business.”

However, Pastor Geoff Browning, a former HP employee and is now a Presbyterian campus minister at Stanford University, disagrees.

There are many examples over the past ten years of school boards, unions and churches ending their relationships with HP and HPE. Civil Society has reacted to HP’s prominent role in the Occupation of Palestine in a number of ways.

For example, last April [2019], 32 Christian congregations declared themselves to be HP Free churches and pledged not to buy HP products.

In 2018, the Student Federation of India joined the global campaign to boycott HP, BDS Australia made a pledge to not buy HP products as well as to start information actions outside retailers that sell HP products and Dublin City Council became the first European capital to endorse a boycott of Israel by voting to discontinue a contract with HP.

In May 2017 the National Union of Teachers, the United Kingdom`s largest teachers’ union, became an HP-free zone and pledged not to buy or use HP products or services as a gesture of solidarity with the Palestinian people.

In 2014 the Presbyterian Church USA voted to divest from HP over its role in the Israeli occupation. At the time, HP was targeted for selling equipment intended Israel`s illegal activities in Occupied Palestine.

In 2012 the United Methodist Church and the Quaker Friends Fiduciary Corporation passed resolutions regarding BDS.

Next time: Companies on the UN Blacklist, starting with General Mills

Councils around the world boycott Israel by Asa Winstanley (The Electronic Intifada, June 22, 2018)