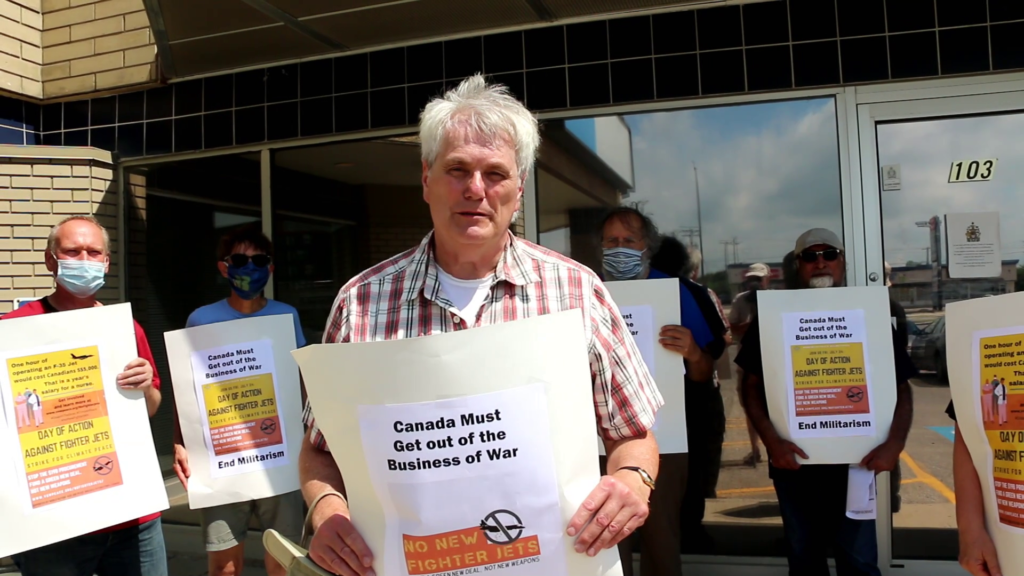 Peace Alliance Winnipeg joins with many peace organizations in this national day of action against the purchase of new fighter jets. At the end of July, the Federal government is to receive bids from three of the world’s large manufacturers of military jets: Boeing (Super Hornet), Lockheed Martin (F-35) and Saab (Gripen) to replace the CF-18’s it uses.

This is a costly undertaking for Canadian taxpayers: $19 billion to purchase 88 jets – the
number was increased by the Liberal government from the original proposal of 65. On top of this will be on-going cost of maintenance. It has already been a costly expense.

Canada has footed some of the development costs for one of the planes being considered – the F35, without even a commitment to purchase the aircraft. A payment of $70 million was recently made to Lockheed Martin just to keep a seat at the table. Since 1997 Canada has paid US $541 million in such payments – a move it justifies as good for business and jobs. Daniel Le Bouthillier a spokesperson for the Defence Department said: “This participation provides Canadian industry with contract opportunities that are only available to program participants.”

It is economically wasteful and morally repugnant to find in weapons production the “benefit” of jobs and profits for industry.

The purchase of these fighters is defended from a number of angles, all of which have been heard many times before and must be called out for being part of the problem. No one in government has challenged the need or rationale to procure new fighters. Worse yet, at a time when the world has been shocked into the need for global cooperation by the climate crisis and the Covid 19 pandemic, it is business as usual for the military-industrial complex and the government treasury which pays to sustain it.

Canada cannot be a factor for peace and stability in the world or contribute to solving the problems that confront all humanity, such as climate change, if it allows itself to be part of the arms race and supports the military-industrial complex and international confrontation over co-operation.

We are calling on the federal government to stop plans to purchase 88 new fighter aircraft at a cost of $19 billion.

← Canada does not deserve a UN Security Council Seat
Why boycott Hewlett Packard? →