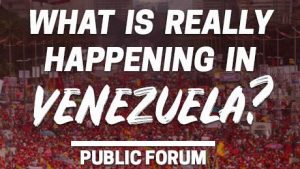 Mainstream media and government sources in Canada and the United States have provided an extremely unbalanced picture of Venezuela, portraying it as a dictatorship when in fact the governing party has won re-election consistently over the past (almost) 20 years in contests deemed fair and democratic by international observers. Through crippling economic sanctions, financial support to anti-government forces, and public musings about the desirability of regime change, the US government has made it clear it wants to put a more reliable puppet in power in Venezuela. With its long history of overthrowing governments it cannot control, the US destabilization campaign is par for the course. As is usually the case, the Canadian government has been an enthusiastic partner.

Doing its part to address the one-sidedness of this situation, the Winnipeg Venezuela Peace Committee held a very well attended public forum on Oct. 19, 2018 entitled What is really happening in Venezuela? The forum featured Steve Ellner, professor of economics at the University of Oriente in Puerto La Cruz, Venezuela and Carlos Ron, Venezuelas Vice Minister for Foreign Affairs, responsible for North America, who participated via Skype.

Regrettably, the Skype connection was so poor that Ron’s presentation was largely incoherent. While I recorded the entire event, I have not included the Skype portion because of terrible audio quality.

On a more positive note, Professor Ellner provided a detailed, highly informative description of conditions in Venezuela and an accessible analysis of how the country arrived at the state it is in.

He is more than qualified to talk about this country. Ellner earned his Ph.D. in Latin American history at the University of New Mexico in 1980. Since 1977 he has taught economic history and political science at the Universidad de Oriente in Puerto La Cruz, Venezuela and for ten years taught in the graduate school of law and political science of the Universidad Central de Venezuela. He has been a visiting professor at numerous schools in the United States and Latin America.

As Professor Ellner underlined, more than once, the problems faced by the Venezuelan people are complex and challenging; the situation is complicated and difficult to understand without considering many factors.

Opposition to the Chavistas by the Venezuelan oligarchs and their foreign backers began as soon as Hugo Chavez was elected in 1999. By fomenting coup attempts, violence and economic instability, these forces have undermined Chavista attempts to alleviate widespread poverty and have magnified the suffering of the Venezuelan people.

Not everyone in the audience would agree with the last paragraph; some were very critical of the Maduro government. Nonetheless, the discussion was wide ranging, open to all perspectives, respectful and civil.

Here is my video report.