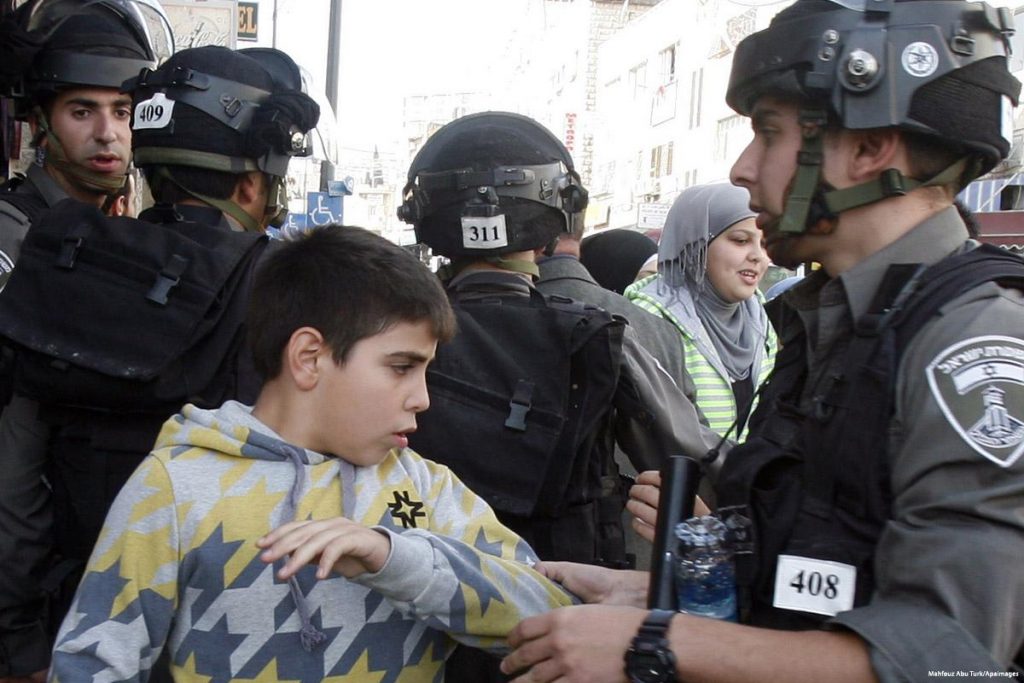 Palestine is a society of children, and children are in every way the greatest victims of Israel’s occupation of Palestine, whether through their every day experiences of violence, loss of health care, education, child labour practices in illegal Israeli settlements, and of course through their experience of incarceration in Israeli prisons as well as the physical and mental abuse they endure at the hands of the Israel military.

Campaigns such as No Way to Treat a Child, an initiative of Defense of Children International-Palestine, work to bring awareness to this ongoing abuse, but focusing on the fact that today Israel remains the only country that arrests, detains and tortures children. It is important to note that in Israel a Palestinian child is considered an adult at age 16, but Israeli children are considered children up until age 18.

The numbers themselves are staggering. According to DCI Palestine, nearly 500 children are currently prisoners in Israeli jails, some are as young as 12 years old. Furthermore, 80% of kids detained have been physically assaulted. Under Israeli military law anyone under 12 years old is subject to being prosecuted in a military court. Children as young as 5 years old can be arrested in the middle of the night without a warrant or probable cause. Children may be placed in solitary confinement and forced to sign confessions in Hebrew which they may not understand. They also may be denied access to food and water. Of 137 kids detained and prosecuted under Israeli military courts in 2017, at least 26 children were held in solitary confinement for as long as 25 days.

Article 37 of the UN Convention on the Rights of the Child states: “that the arrest, detention, or imprisonment of a child shall be used only as a measure of last resort and for the shortest period of time.”

In 2017 alone DCI Palestine notes 74.5% of children experienced some form of physical violence following their arrests and 62% were verbally abused, intimidated or humiliated.

It is important to note that in its treatment of children Israel is in violation of the UN Convention on the Rights of the Child (which Israel’s Knesset ratified in 1991). The convention states that children are protected and entitled to a juvenile judicial system. Yet when Israel arrests children no warrants are required and there are no oversights when children are arrested in the middle of the night.

After their arrests children are tried inside Israel, in violation of international law, and then tried through a military court. Furthermore, because the children are held in Israel, families are not unable to visit them because they are denied entrance to Israel.

In addition, the convention states, “No child shall be subjected to torture or other cruel, inhumane, or degrading treatment or punishment.” Yet 75% of children have experienced some form of physical violence during their arrests, transfer and interrogation.

Israeli stands in violation of International Law in its use of excessive force and intentional use of lethal force. In total, 961 children were injured by Israeli forces in 2017 from a mix of live ammunition, rubber coated bullets and crowd control weapons in the West Bank.

During the recent peaceful protests around the U.S. decision to recognize Jerusalem as Israel’s capital, children in East Jerusalem were especially vulnerable to misuse of black sponge-tipped plastic bullets by Israeli forces. Two children, ages 13 and 15, suffered permanent eye loss after being with such bullets. Neither were involved in confrontations at the time.

Last December 15 , Mohammed Tamimmi was shot in the face with a rubber-coated steel bullet. Ahed Tamimmi, Mohammed’s sister, slapped the soldier and has since been arrested and jailed. She is 16 years-old.

Accountability is extremely rare in cases were Israeli forces are accused of committing crimes against children. The Israeli rights group Yes Din reported that of 186 internal investigations into Israeli soldiers harming Palestinians in 2015, only 3.1% lead to an indictment.

In 2014 Israel killed 550 children in its 51-day attack on the region; 68% of children killed were under 12. Gaza regularly experiences electricity shortages some as long as 20-22 hours, as well as lack of clean water and medical facilities. These conditions make children especially vulnerable as they are not able to leave Gaza for medical care. Children currently living in Gaza are facing acute disaster around water and sanitation standards according to UNICEF.

Children’s experience of violence has far-reaching effects. For example, Israel destroyed 83 schools in its attack on Gaza. Children also face dangers traveling to and from school, including harassment from soldiers and having to pass through checkpoints. Soldiers may also fire directly into school areas. Lack of electricity in Gaza means children may not be able to study and the ten year blockade means they often don’t have access to books and supplies.

Children often leave school out of economic necessity and they may work in Gaza in dangerous facilities or settlements.

According to Human Rights Watch, illegal Israeli settlements employ hundreds of children, some as young as 11 working in agriculture. The children work in high temperatures, carry heavy loads and are paid below the minimum wage, They may work on settlement farms without child labour laws.

The Promoting Human Rights by Ending Israeli Military Detention of Palestinian Children Act prohibits financial assistance to Israel from being used to support ill-treatment and torture of Palestinian children in military detention. It was introduced in congress by Rep. Betty McCollum on November 14 and its aim is to establish a minimum safeguard, which is basic due process rights for Palestinian children currently under Israel military detention.

← Will NATO’s growth lead to world war?
Billboard for Peace →