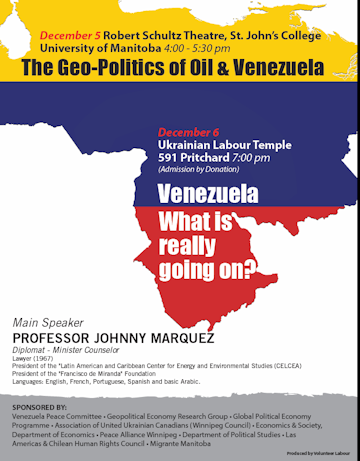 The Venezuela Peace Committee, of which Peace Alliance Winnipeg is a member, is hosting two events that will interest Winnipeggers concerned about the ongoing crisis in Venezuela:

Dec. 5th: The Geopolitics of Oil and Venezuela
Robert Schultz Theatre – University of Manitoba
4:00 to 5:30 PM

The main speaker at each event is Professor Johnny Marquez, a Venezuelan lawyer, diplomat and scholar and president of the Latin American and Caribbean Center for Energy and Environment Studies.

Please help promote these events by sharing this article or circulating the poster, which you can download here.

The Venezuela Peace Committee is also promoting a petition that calls for Canada to cease its interference in Venezuelan affairs. The text reads as follows: