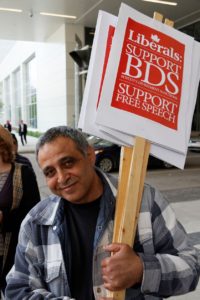 Winnipeg, May 28, 2016: Peace Alliance Winnipeg and Independent Jewish Voices Winnipeg joined forces to hand out information to Liberal Party delegates about the Boycott, Divestment and Sanctions campaign against Israel and to remind them that Liberals must not cease supporting free speech and human rights. Photo: Paul S. Graham

The 2016 Walk for Peace had as its theme “Freedom for Palestine”. It was the culmination of several events in the month of May which dealt with issue of Palestine and the right of the Palestinian people to self-determination. The events were organized by different organizations showing the developing movement in support of the Palestinian cause.

The month began with the MayWorks production of the play about Rachel Corrie, a young American peace activist, who was killed while in the West Bank protecting a Palestinian home from demolition by the Israeli Defence Force. On May 15, a commemoration of the Nakba was held in Memorial Park. This was followed by an action at the Liberal Convention to oppose the stand the Liberal Party and Parliament took to condemn supporters of the Boycott, Divestment, Sanctions (BDS)campaign aimed a bringing economic and political pressure on the state of Israel.

Following this was a demonstration outside the “gala” for the Jewish National Fund which is heavily involved in the colonization of Palestinian lands.

All these events are important for developing the movement in support of Palestine. It is important because it rests with civil society to push forward this movement. There is a clear parallel between the struggle against in apartheid in South Africa and the apartheid practiced by Israel. The struggle against apartheid South Africa was not accepted at its outset by most nations let alone the most powerful. In 1974, 13 years after the Sharpeville massacre, the United States, the U.K. and France voted against a resolution to expel South Africa from the U.N. for human rights violations. Today, the same official intransigence is taking place with respect to Palestine.

While there is some small progress in recognizing the right of Palestinians to self-determination overall it remains a travesty of international neglect and particularly so when it comes to the foreign policy of Canada. In February, the House of Commons supported a Conservative resolution condemning any Canadian who supported the campaign of Boycott, Divestment and Sanctions against Israel. The exceptions were a mere handful of Liberal MP’s, the NDP and the Green Party. Canada may claim it is against settlements in the West Bank and supports the right of Palestinians to self-determination but when push comes to shove it chooses to condemn the broad movement for BDS.

The actions in May were the result of the efforts of trade unions, organizations committed to social justice and human rights, faith groups and even individuals. The fact that this movement rests with civil society to develop shows the importance to continue such actions.

← Israel and the destruction of Palestinian education
Reflects in Water →