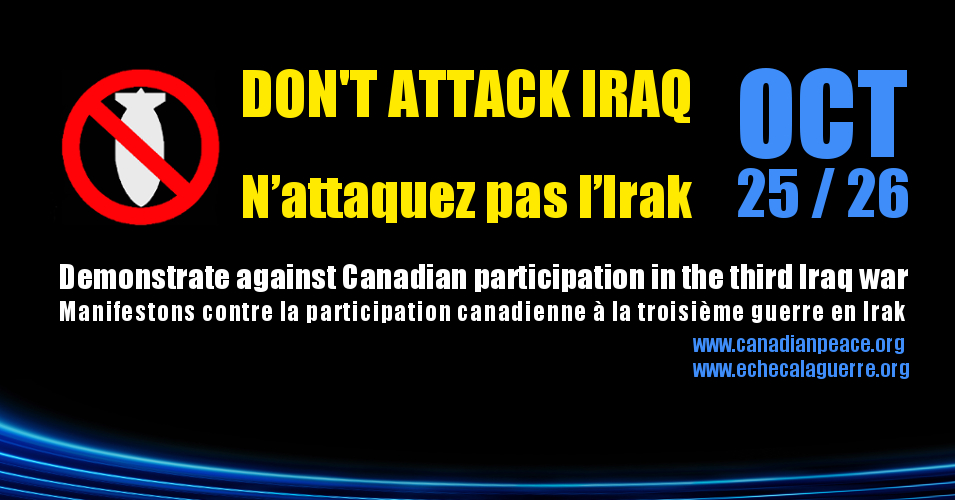 The Canadian Peace Alliance and the Collectif Échec à la guerre are calling for a weekend of protest actions, on 25-26 October, against Canadian participation in the third Iraq war.

These protests will take place on the 12th anniversary of the first mobilizations in Canada and the US – in the Fall of 2002 – to oppose the preparation of the US invasion and the war of occupation in Iraq that would last from 2003 to 2011.

In Winnipeg, Peace Alliance Winnipeg will hold an information picket at the 4 corners of River Avenue and Osborne Street in Osborne Village.

War breeds war. Please feel free to bring your own placards, expressing your hope for a more peaceful world.

The Canadian Peace Alliance has asked the people of Quebec and Canada to protest:

– Against a new illegal war that contributes to dismantling the existing world order and that threatens « world peace and security » while pretending to defend them;
– Against the security and humanitarian pretexts invoked by the new coalition: the protection of Iraq’s population has nothing to do with the real motives of this war, which will cause them more suffering and further deteriorate their living conditions;
– Against a Canadian foreign policy centred on intensifying conflicts and war;
– Against the hijacking of huge amounts of public resources to make war, promote the military industry, glorify the army and Canada’s military past,

Together, let’s take to the streets to demand:

– The immediate end of Canadian participation in this new aggression coalition which has been set up for the strategic interests of the US empire and its allies;
– A freeze on all major procurement projects of the Canadian military;
– The organization of a broad public debate on Canadian foreign policy, the role of the army, the military industry and the arms trade;
– That the Canadian government immediately cease deportation proceedings against U.S. Iraq war resisters and create, once and for all, a provision that would allow them to remain in Canada.while for many years « austerity measures » have cut education, healthcare, public services, the promotion of women’s rights, the protection of the environment, international cooperation, etc.

← Canadian Human Rights on Trial: the Case of Omar Khadr
The War in Eastern Ukraine and the New Cold War →