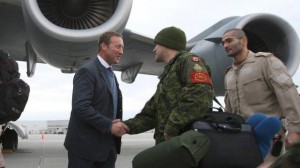 Minister of Defence Peter MacKay shakes hands with Canadian forces members of Squadron 429 at CFB Trenton, on Tuesday Jan. 15, 2013. Canada is sending the C-17 Globemaster to help France with the conflict in Mali. (Lars Hagberg /THE CANADIAN PRESS)

By Campbell Clark, The Globe and Mail

The Canadian government will extend the tour of the heavy-lift transport plane shuttling equipment from France to Mali for a military mission.

Initially, Prime Minister Stephen Harper offered the massive C-17 plane for a one-week mission. But France has asked Canada and other nations to provide more air-transport help, including assistance to carry a West African force of 3,300 into Mali.

Now Mr. Harper’s government is set to approve an extension, to be announced later this week.

French troops intervened Jan. 10 to stop the advance of Islamist fighters linked to al-Qaeda who took over Mali’s north in April and who had started to seize government-controlled towns farther south. The advances had raised fears that Mali would fall to jihadists intent on controlling a broad swath of North Africa. Now France insists the country must be stabilized to thwart a threat to the region, and the world.

Mr. Harper’s government has sought to set limits on its contribution to the Mali operations, fearing so-called “mission creep” that will drag Canada into a deeper role. It has ruled out so-called boots on the ground involved in combat in Mali. But Mr. Harper and Foreign Minister John Baird also have stressed that the Canadian government wants to see African leadership in the mission.

It’s not yet clear how long the C-17 extension will last, or whether Ottawa will meet France’s request for more planes in addition to the C-17.