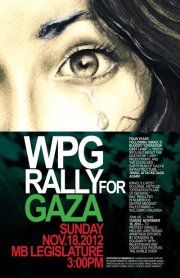 Join us — this SUNDAY, NOVEMBER 18, 2012 — to protest Israel’s hellish, airstriking Apartheid efforts by standing in solidarity with Palestinians and countless peoples the world over!