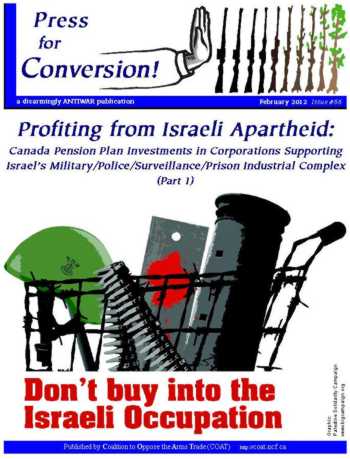 By Richard Sanders, coordinator, Coalition to Oppose the Arms Trade

In 2004, the UN International Court of Justice ruled that Israel’s separation wall is illegal. Construction has continued and it is expected to reach 760 kms. in length. Besides annexing their land, the wall separates Palestinians from their orchards, families, hospitals, workplaces and holy sites.

A BNC statement called “Occupy Wall Street not Palestine,” describes the BDS effort as being “deeply rooted in decades of Palestinian peaceful resistance to colonial oppression,” and as “inspired by the South African struggle against apartheid as well as the [US] civil rights movement.”

The call for a BDS campaign noted that for decades:

“Israel has denied Palestinians their fundamental rights of freedom, equality, and self-determination through ethnic cleansing, colonization, racial discrimination, and military occupation. Despite abundant condemnation of Israeli policies by the UN, other international bodies, and preeminent human rights organisations, the world community has failed to hold Israel accountable and enforce compliance with basic principles of law.”

Despite hundreds of UN resolutions denouncing Israel’s violations of international law, it has always received financial backing and military aid, primarily from the US. Between 2000 and 2011, the US gave Israel US$30 billion worth of the latest weapons systems and related equipment.

In response to the UN’s inability or unwillingness to stop Israel’s illegal acts, Palestinians initiated the BDS campaign calling upon “people of conscience all over the world” to “launch broad boycotts, implement divestment initiatives, and to demand sanctions against Israel, until Palestinian rights are recognised in full compliance with international law.”

On July 8, 2011, the BNC called for an arms embargo on Israel. Endorsed by such Nobel Peace laureates as South African Archbishop Desmond Tutu, its primary goal is to stop Israel’s supply of “arms and related materiel of all types, including the sale or transfer of weapons and ammunition, military vehicles and equipment, para-military police equipment, including dual-use equipment, and spare parts.”

Three days later, Israel’s Knesset responded to the BDS movement with a repressive antiboycott law to penalise Israeli individuals and groups that promote the boycott.

This issue of Press for Conversion! – and one soon to follow – are inspired by the Palestinian proposal for a military/police embargo of Israel, and by the original BDS call to:

* Boycott Israeli and international companies “that profit from the violation of Palestinian rights,” and

* Divest from “university investment portfolios and pension funds” that are “used to finance such companies.”

COAT’s research cites data from hundreds of sources to expose 64 corporations that have two things in common:

(1) they profit from links to Israeli government institutions, agencies and corporations that hide behind the euphemisms of “defence” and “homeland security,” and

The CPP also holds shares in many corporations that invest their wealth in military and so-called “security” industries that support Israeli apartheid. This is done directly, or through venture capital funds like Vertex, see pp. 50-52.

There are 16 million CPP contributors and beneficiaries who have been forced to invest their retirement savings in corporations with varying degrees of complicity in Israel’s system of apartheid, its occupation of Palestinian lands, its military/”security” industries, and its aerial bombardments of Lebanon (2006) and Gaza (2008-2009).

Readers are asked to examine the evidence presented here and to investigate these issues for themselves. Hopefully, this will help to initiate discussion about Israel’s occupation, the abuse of Palestinian human rights, and the unwitting complicity in these crimes that has been forced upon Canadians by their mandatory contributions to the CPP.

COAT’s publication of this research is the first step in a campaign that will include petitions, letter writing and lobbying efforts to urge the CPP Investment Board to divest from companies that support Israel’s illegal and discriminatory policies. This campaign will also encourage boycotts, divestment, and other grassroot efforts to draw public attention to the issues raised here. To make this effort a success, your support and assistance, is urgently requested.