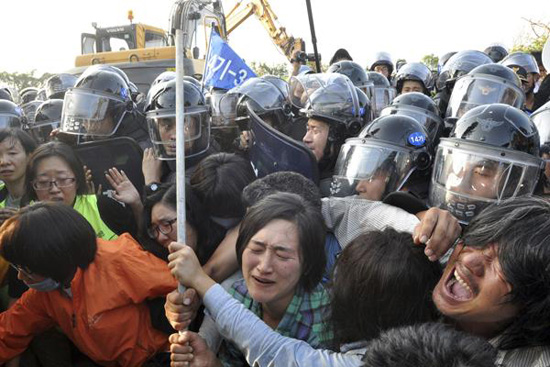 At the end of February, 2012, I joined the Global Network Against Weapons and Nuclear Power in Space to attend an international peace conference, and connect with the villagers and activists living in Jeju Island’s 450-year old Gangjeong village.

The South Korean Navy, with pressure from the United States, intends to build a naval base at this southern coastal village. For five years, the villagers have been fighting this decision through political and legal means, while simultaneously resisting each stage in the process. The Navy, with lead contractors Samsung and Daelim, has taken over people’s property; felled trees; destroyed greenhouses; built miles of fence preventing the village’s view or access to Guroembi, their ancient, holy place of prayer.

The people resist. When they can’t walk to the Guroembi rocks, they kayak. When the kayaks are blocked, they swim. It was humbling to bear witness to the passion and love people had for their beloved Guroembi. Jeju is a volcanic island, and there are many rock formations, but Guroembi is unique. These living rocks have fresh water springs that lay beneath; coral reefs that sit off shore as colorful as any tropical reef; endangered red crabs that feed off these rocks. This eco system and the villagers – fishermen, women divers, farmers, lovers of nature – have had no voice in the decision to bury Guroembi in cement to build a naval base. They have been organizing for years to build community, to change the hearts and minds of decision-makers, and to prevent the destruction of their village.

Their struggle is not only to protect nature’s gifts; they also have a noble, passionate commitment to a democratic process. The injustice of a Navy’s dictate to confiscate land and expose an island to the vagaries of war in this 21st Century is an unacceptable control over people’s lives. The people refuse a quiet acquiescence to this atrocity. Samsung and the Navy bring waves of riot police from the mainland to rough-up and arrest non-cooperative villagers, and to block access to the sea and shore that has a centuries-old history. Indignant, the people persevere, continuing to work every avenue possible to save Gureombi.

In our short time on Jeju Island, our international delegation got a glimpse of the determination and creativity the villagers have displayed over the years. We have been watching the videos from Gangjeong faithfully, of villagers and activists arrested for laying their bodies down in front of the wheels of the cement trucks, the cranes, the machines meant to blast holes deep into the heart of Gureombi. And, once released from prison, villagers lay their bodies down again.

Although the Korean Peninsula has plenty of military installations, until now, Jeju Island has been spared this fate. The public relations campaign claims this new naval base will be “dual use” – insulting the intelligence of all by providing illustrations of a pier on one side of the base with a huge luxury liner docked, with mini-skirted women prancing the upper deck, while two submarines and a naval destroyer dock at a nearby pier. Who gets paid to create such fantasies?

In fact, this base is intended to dock U.S. nuclear submarines, Aegis Destroyers (built in my home town of Bath, Maine) and aircraft carriers. Based on a mutual defense pact and Status of Forces Agreement (SOFA), the U.S. has the right to use any South Korean ports and airfields. President Barack Obama has declared a U.S. military “pivot” toward Asia, while China and the U.S. continue competing for the world’s oil, gas, and underground minerals. The truth is, the U.S. has a huge military presence in the Asia Pacific region already, and has an expressed goal of dominating militarily in all corners of the globe “to protect U.S. interests and investments.” A military base in Gangjeong will make Jeju Island a target in the war-game exercises the U.S. regularly engages off the coast of China. The villagers are correct in resisting this dangerous disruption to their way of life.

Korea’s Jeju Island has earned a triple crown of UNESCO recognition as: 1) a World National Heritage site; 2) a Biosphere Reserve Zone, and 3) a World Geological Park. It is a government-designated “absolute preservation area”. It is characterized by rare rock formations, abundant and fertile farmlands, pristine fresh and seawaters, and endangered marine life. As concerned world citizens, we should all honor the people of Gangjeong who are giving their lives to this 21st Century struggle.

Finally, Professor Yang Yoon-Mo recently turned 56 in Jeju City prison. He is in jail for the second time in a year for putting his body in front of cement and construction trucks; The first time, he fasted for over 70 days. Since his arrest in January, he has begun his hunger strike again, and is now in his fourth week. I visited him in prison before I left the island. I can never express the emotion of the experience of hearing this gentle, holy man explain so clearly: “If Guroembi lives, I live; if Guroembi dies, I die. Do not cry for me, cry for the future generations who may not be able to know the beauty of Guroembi.”

I urge us all to take action. As I write, the navy is planning to start blasting Guroembi rocks today or tomorrow. Save Guroembi. Save Yang Yoon-Mo. Do your part.

Especially put pressure on the Jeju Island Governor to prevent the blasting of Goreombi rocks! (Could we fill his email box today?) Let them all know that the world is watching, and that destruction of the village to build a naval base needs to stop. Keep track of the current situation by joining two facebook pages: Save Jeju Island; and No Naval Base on Jeju. As the people say to us always, “Please save Gangejong, the Life and Peace village.”