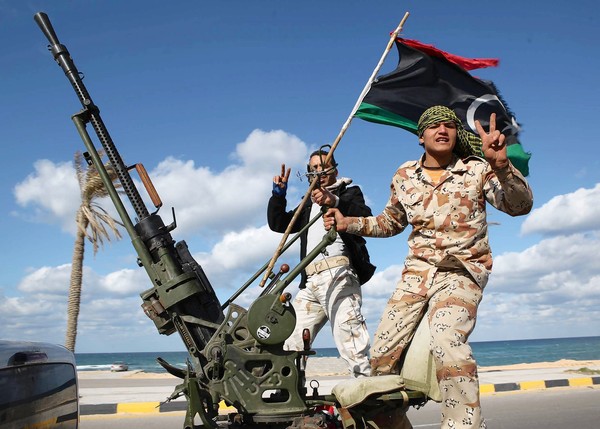 Members of militias from western Libya parade through Tripoli, the capital. The nation's militias have become a law unto themselves and pose a challenge to the ruling Transitional National Council. (Abdel Magid Al Fergany, Associated Press / February 14, 2012)

Lawlessness still pervades Libya a year after the outbreak of the uprising which ended 42 year of Colonel Mu’ammar al-Gaddafi’s repressive regime. Hundreds of armed militias, widely hailed in Libya as heroes for their role in toppling the former regime, are largely out of control. Their actions, and the refusal of many to disarm or join regular forces, are threatening to destabilize Libya, hinder the much-needed building of accountable state institutions based on the rule of law, and jeopardize the hopes of millions of people who took to the streets a year ago to demand freedom, justice and respect for human rights and dignity.

Hundreds of armed militia groups, established at local levels during the fighting, continue to operate largely independently of the central authorities, often effectively controlling specific areas or neighbourhoods. Some militia members have a military background but most were civilians. Militias have established sometimes fluid networks of co-operation. Frequent armed clashes between different militia groups have caused death and injury among fighters and uninvolved bystanders.

In 2011, thousands of mainly young men took up arms under the banner of the National Transitional Council (NTC) – the loosely structured opposition leadership formed at the end of February – to overthrow the old order. After opposition fighters, backed by NATO strikes took control of most of the country in late August, the NTC failed to get a grip on these militias. Despite pledges to bring to justice those who committed war crimes and human rights abuses on both sides, the authorities have so far failed to take action against suspects who fought with the NTC forces, sustaining a climate of impunity for human rights abuses.

Militias took captive thousands of suspected al-Gaddafi loyalists, soldiers and alleged foreign “mercenaries”, many of whom were tortured or ill-treated in custody, in some cases leading to death. Scores of suspected al-Gaddafi loyalists were unlawfully killed following capture, among them the ousted Libyan leader himself and one of his sons. Militias also looted and burned homes and carried out revenge attacks and other reprisals against alleged al-Gaddafi supporters, forcibly displacing tens of thousands of people.

Militias also continue to seize and detain people, outside any legal framework, and hold them in secret detention centres before handing them over to other facilities run by officially or semi-officially recognized military or security entities. The captors do not identify themselves, though the name of the militia is often daubed on their vehicles, and no indication is given to their relatives as to their destination. Despite releases, thousands of detainees remain held without trial or any means to challenge the legality of their detention.

In January and early February 2012, Amnesty International delegates interviewed scores of victims of torture who were held in and around Tripoli, al-Zawiya, Gharyan, Misratah, and Sirte, as well as several families of people who died in the custody of militias after they were tortured. Detainees told Amnesty International that they had been suspended in contorted positions; beaten for hours with whips, cables, plastic hoses, metal chains and bars, and wooden sticks; and given electric shocks with live wires and taser-like electro-shock weapons. The patterns of injury observed were consistent with their testimonies. Medical reports confirmed the use of torture on several detainees who had died. Most of the militia-held detainees interviewed were Libyans suspected of having supported or fought on behalf of al-Gaddafi forces during the conflict. Hundreds of foreign nationals, mostly sub-Saharan Africans, also continue to be detained, often for no more than having entered Libya irregularly and regardless of the fact that they may be entitled to international protection, and some of them said they were tortured.

Detainees are often tortured immediately after being seized by militias and subsequently during interrogation, including in officially recognized detention centres. To date, detainees have not been allowed access to lawyers, except for rare cases in eastern Libya. Several told Amnesty International that they had confessed to crimes they had not committed just to end the torture.

Some detainees were too scared to speak – fearing further torture if they did so – and were only prepared to show Amnesty International delegates their torture wounds. Human rights defenders, prosecutors, doctors and many others, including militia members opposed to such abuses, told Amnesty International delegates that they were too afraid to speak publicly about militia abuses they had witnessed. Their fears are justified – people who lodged complaints about abuses reported receiving threats or being attacked by militias.

The Libyan authorities have been alerted on numerous occasions to the ongoing abuses by militias. In May 2011 Amnesty International submitted a memorandum to the NTC detailing patterns of abuses by then opposition fighters, including torture of detainees and deliberate killings of captured fighters and detainees. In September and October 2011, Amnesty International published two reports which described abuses by militias, including torture that it had investigated in previous months. On 26 January 2012, Medecins Sans Frontieres (MSF) suspended its work at a clinic in a detention centre in Misratah because of ongoing torture of detainees during interrogations. The same day, Amnesty International reported recent incidents of death in custody and torture in Tripoli, Misratah and Gharyan. The Prime Minister and Deputy Prime Minister announced that more detention centres would be brought under the control of the authorities and promised to investigate the reported abuse, whereas Ibrahim Betelmal, the head of one of the interrogation centres in Misratah where detainees are frequently tortured, accused both organizations of being supporters of the al-Gaddafi regime. He did, nevertheless, acknowledge that there “may have been a few cases of former rebels taking revenge”, but insisted that he had not given orders to torture. Also on 26 January 2012, the UN Commissioner for Human Rights, Navi Pillay, expressed concern that “the lack of oversight by the central authority creates an environment conducive to torture and ill treatment” and called on the Libyan authorities to take control of all makeshift prisons to prevent further atrocities.

However, the NTC-led transitional government appears to have neither the authority nor the political will to rein in the militias, many of which are reluctant to disband or submit to the central authority. The authorities have been unwilling to recognize the scale of militia abuses, at most acknowledging individual cases despite the mounting evidence of patterns of grave, widespread abuses in many parts of the country. This, together with a lack of action to hold perpetrators to account, is sending the wrong message to the militias and encouraging further abuses. Indeed, the failure of the authorities to even begin to investigate with a view to bringing to justice former anti-Gaddafi fighters responsible for war crimes during the conflict and human rights abuses has perpetuated the climate of impunity for such crimes.

Amnesty International welcomed the NTC’s publicly stated commitment to respect international human rights law, and its calls on supporters to treat captives with dignity and to avoid revenge attacks and other reprisals. In response to an Amnesty International report in September 2011, the NTC pledged to put “its efforts to bring any armed groups under official authorities and will fully investigate any incidents brought to its attention.”

This pledge has not, however, been fulfilled and no action has been taken to investigate even the most serious abuses committed by former opposition fighters and militias and to bring those responsible to justice. For example, no investigation has been carried out into the killing of some 65 civilians and al-Gaddafi loyalists whose bodies were found on 23 October 2011 in the Mahari Hotel in Sirte, despite clear evidence identifying some of the perpetrators. Similar impunity has been apparent in other cases highlighted in this report involving people who were tortured to death, even though the prosecutors have seen the scarred bodies of the victims, families have lodged complaints, and Amnesty International and others have publicized the cases.

After four decades of widespread human rights abuses and authoritarian rule under Colonel al-Gaddafi, the new Libyan authorities face the daunting task of establishing a proper foundation for the rule of law and respect for human rights. Under the previous regime, most opponents were silenced, in prison or in exile. Draconian legislation outlawed dissent and the establishment of independent organizations. Hundreds of political prisoners were detained arbitrarily. Special courts sentenced opponents after grossly unfair trials. Impunity for torture, extrajudicial executions and enforced disappearances was deeply entrenched. During the eight-month conflict in 2011, al-Gaddafi forces executed many prisoners in their custody and committed war crimes and other human rights abuses. Thousands of people lost their lives fighting to overthrow the government, some slaughtered in groups after they had been rounded up by soldiers. Many of those in today’s militias suffered under the old regime and saw their friends and relatives die in the conflict; some of them want revenge or to exact vigilante-style justice.

Confronting the militias, holding them to account for their actions and enforcing the rule of law are undoubtedly hugely difficult challenges for the NTC, which itself is an interim body without the authority of a democratic mandate. Elections, if they happen on schedule, are due to take place in June 2012. The authorities are also confronted by continuing fighting between rival militias in what appear to be battles to carve out fiefdoms and areas of control.

An ultimatum of 20 December 2011 set by the government for militias to leave Tripoli has been ignored and programmes for integrating members of militia into regular forces are making slow progress. The authorities must ensure that those who have committed or acquiesced in human rights abuses are excluded and not placed in positions where they could repeat their abuses. Those who are suspected of having committed war crimes and serious abuses must be excluded pending investigation and prosecution.

Another challenge is to tackle the widespread discrimination and xenophobia against sub-Saharan Africans and dark-skinned Libyans from Tawargha and other parts of Libya where support for al-Gaddafi forces during the conflict was reportedly high. The 30,000 residents of the town of Tawargha, who were forcibly displaced during the conflict, are still barred from returning to their town, where their homes have been looted and burned down. They remain in poorly resourced camps in Benghazi, Tripoli and elsewhere in Libya and face an uncertain future. So far the NTC has been unwilling to take on the militias and local authorities in Misratah who are determined not to allow the residents of Tawargha to return home. Similarly, thousands of people have been evicted or fled their homes in the Nafusa Mountains, mainly people from the Mshashiya and Qawalish tribes, as well as in Sirte and Bani Walid, and remain targeted by militias because of their alleged support for al-Gaddafi forces during the conflict.

It is crucial that the new authorities take concrete steps to show all Libyans that the four decades of repression and widespread human rights abuses are over, and that everyone will be equally protected by the law. They must make it clear that torture, revenge attacks by militia or any other forms of human rights abuse will not be tolerated and that perpetrators will be held accountable – regardless of their political affiliation or other role or connections. Among other things, Amnesty International urges the authorities to:

← Jeju Islanders Need Our Help
Get fraud out of Parliament (Winnipeg) →