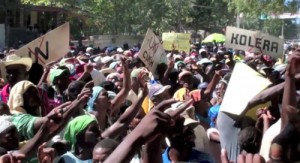 Decem­ber 9, 2011: Angered by the UN-caused cholera epidemic that has claimed thousands, Haitians rallied at the UN Sta­bi­liza­tion Mis­sion in Haiti (MINUSTAH) Base at St. Marc. Photo: from a video produced by Nick Strat­ton, Bureau des Avo­cats Inter­na­tionaux. Watch it at http://ijdh.org/archives/24340.

Two years after an earthquake killed 158,000, the majority of Haitians continue to battle against hunger, disease, homelessness and political repression. Half a million people remain in refugee camps and many thousands who have found other accommodations are living in buildings that have been designated as unsafe and requiring demolition or major repairs.

Clean water is unavailable to almost half the population and sanitation, in the form or latrines, is available to only 34%. It is a formula for disease, and the 2010 cholera outbreak, traced to the criminally negligent sewage disposal practices of UN troops, sick­ened nearly 500,000 peo­ple and killed more than 6,500 oth­ers.

With all of the aid money that has been pouring into Haiti, it would not be unreasonable to expect living conditions to be much better than they are. Journalist Kim Ives, a writer and editor of Haiti Liberté, who spoke on this topic last Thursday at the University of Manitoba, provided this summary:

Clearly something is wrong. Kim Ives summarized the obstacles to effective aid and reconstruction as follows:

If you want to know more, watch my video report.