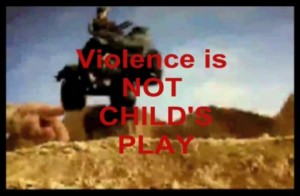 Making war has been a human pursuit for thousands of years.

Playing at war, it would seem, is at least as old. This ancient Greek toy, a model of a war chariot, fashioned from clay, has survived the millennia to bear witness to our enduring attachment to violence and domination.

War requires warriors. Because killing is not something that comes naturally to most of us, a long period of preparation is usually needed. It begins, in childhood, with the toys we give to our children.

The design and marketing of war toys are anything but child’s play. According to an article in the New York Times, the US military and the American toy industry have a long history of working together. It’s a relationship where both parties benefit – toys are more realistic and often, toys have inspired weapons development. But there’s more. As the author observes:

“Because the newest generation of soldiers grew up playing with electronic toys and games, the symbiosis between them is nearly genetic. Today’s troops received their basic training as children.”

The popularity of violent video games inspired the US Army to develop its very own video game, which it provides free of charge from its web site. According to the late Gary Webb, an American investigative journalist of considerable renown,

“America’s Army isn’t merely a game, recruiting device or a public-relations tool, though it is certainly all of those things. It’s also a military aptitude tester. And it was designed that way from the start.”

A growing body of evidence confirms that exposure to violent toys, games and media can increase aggressive behavior, desensitize people to violence, and contribute to an exaggerated fear of the world.

Dr. Darlene Hammell, of the University of British Columbia Faculty of Medicine explains:

“A close examination of the issue raises concerns that war toys teach children that:

For the past 10 years, Winnipeg’s Project Peacemakers has conducted an annual inspection of Winnipeg toy stores. The objective is to raise awareness about the levels of violence in children’s toys and games, and to call on retailers, government, and the wider community to take steps to limit this violence.

I tagged along with an inspection team, last month, as it looked at two of the eleven stores covered in this year’s survey and prepared this video report.

Here is how the stores performed in terms of providing peaceful, constructive playthings – as opposed to war toys.

It outta be a crime

Under international law, most wars are crimes – though the likelihood of prosecution is low (unless you are on the losing side). War toys, however, remain perfectly legal in most places. Thankfully, there are exceptions. In 2009, Venezuela passed a “Law Prohibiting War Video Games and War Toys.” Prior to this, according to the Peace and Conflict Monitor, Sweden and Norway have “successful voluntary restriction” of war toy sales, Malta prohibits their import, Greece bans television advertising and Australia places some restrictions on imports. The Monitor says the European Parliament has recommended that its member states ban advertising of war toys and reduce their sale, though I could find no evidence that this has happened.

← Libyan slaughter – a warning to Africa
Marching to war with Iran →