If the Libyan war was about saving lives, it was a catastrophic failure

NATO claimed it would protect civilians in Libya, but delivered far more killing. It’s a warning to the Arab world and Africa 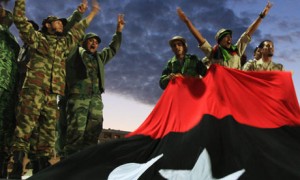 Anti-Gaddafi fighters gesture to the crowds in front of a Kingdom of Libya flag during celebrations in Benghazi on 23 October. Photograph: Esam Omran Al-Fetori/Reuters

As the most hopeful offshoot of the “Arab spring” so far flowered this week in successful elections in Tunisia, its ugliest underside has been laid bare in Libya. That’s not only, or even mainly, about the YouTube lynching of Gaddafi, courtesy of a Nato attack on his convoy.

The grisly killing of the Libyan despot after his captors had sodomised him with a knife, was certainly a war crime. But many inside and outside Libya doubtless also felt it was an understandable act of revenge after years of regime violence. Perhaps that was Hillary Clinton’s reaction, when she joked about it on camera, until global revulsion pushed the US to call for an investigation.

As the reality of what western media have hailed as Libya’s “liberation” becomes clearer, however, the butchering of Gaddafi has been revealed as only a reflection of a much bigger picture. On Tuesday, Human Rights Watch reported the discovery of 53 bodies, military and civilian, in Gaddafi’s last stronghold of Sirte, apparently executed – with their hands tied – by former rebel militia.

Its investigator in Libya, Peter Bouckaert, told me yesterday that more bodies are continuing to be discovered in Sirte, where evidence suggests about 500 people, civilians and fighters, have been killed in the last 10 days alone by shooting, shelling and Nato bombing.

That has followed a two month-long siege and indiscriminate bombardment of a city of 100,000 which has been reduced to a Grozny-like state of destruction by newly triumphant rebel troops with Nato air and special-forces support.

And these massacre sites are only the latest of many such discoveries. Amnesty International has now produced compendious evidence of mass abduction and detention, beating and routine torture, killings and atrocities by the rebel militias Britain, France and the US have backed for the last eight months – supposedly to stop exactly those kind of crimes being committed by the Gaddafi regime.

Throughout that time African migrants and black Libyans have been subject to a relentless racist campaign of mass detention, lynchings and atrocities on the usually unfounded basis that they have been loyalist mercenaries. Such attacks continue, says Bouckaert, who witnessed militias from Misrata this week burning homes in Tawerga so that the town’s predominantly black population – accused of backing Gaddafi – will be unable to return.

All the while, NATO leaders and cheerleading media have turned a blind eye to such horrors as they boast of a triumph of freedom and murmur about the need for restraint. But it is now absolutely clear that, if the purpose of western intervention in Libya’s civil war was to “protect civilians” and save lives, it has been a catastrophic failure.