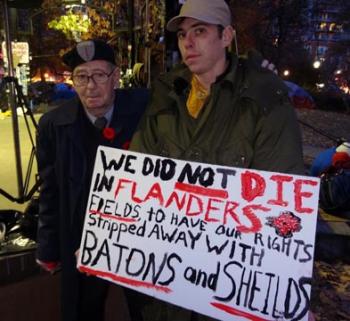 I have seen the best and worst of humanity. I’ve seen countries that no longer exist. I have seen war, ethnic cleansing, and real revolution. I have seen the death and destruction that it brings. I have seen children left behind to live and deal with the costs of our transgressions. I see where this path before us leads. I want see change before any of that happens here. My daughter deserves better.

Lest we forget our veterans, I spent Remembrance Day interviewing Canadian soldiers at Occupy Toronto’s base camp on the grounds of St. James Church. Veterans are beginning to speak out internationally in support of the Occupy movement; on Nov. 2nd, at Occupy Oakland, troops formed a line of solidarity as part of a general strike to protest the police projectile that fractured the skull of 24-year-old Iraq War veteran Scott Olsen. In NYC, on Occupy Wall Street, the passionate speech of another Iraq veteran, Sergeant Shamar Thomas, asking why the police would shoot unarmed protesters, has been seen almost three million times on YouTube. Closer to home, I wanted to mark the anniversary of my rabble.ca article ‘In Remembrance of our Charter of Rights and Freedoms‘ by reporting on the state of democracy, and our right to peaceful assembly, since the Conservative majority.

At the gazebo in the centre of St. James Park, true to Occupy Movement’s core values of participatory democracy, I asked Toronto occupier and veteran Don Bryce to write what he felt was most important to say. This was the first time in decades that he has not been in seclusion on Remembrance Day — he has post traumatic stress disorder — but emboldened by the support of his colleagues, and his time in the demonstration encampment, he ventured out of his tent to speak with me. Attached to the First Special Service Forces, Don Bryce visited 21 countries in his tour of duty; in one day alone, he visited three.

As I interviewed Don beside the gazebo, another veteran, Jim McMillan, arrived to hand out candy bars to the occupiers. Jim comes each night to speak with the occupiers; there are many who are supporting the encampment through food, legal advice, and yurts. Yes, yurts. There are three Mongolian yurts donated by a union, which hold a womens’ safe space, a library, and public meeting space, and for some tongue-in-cheek reason, a donation of 1,000 bars of Degree antiperspirant. Jim’s motto is “What we want for ourselves, we want for everyone” — he wants to support those excluded from the system to make his time in combat worthwhile. I learned about an earlier era in Canadian history from Jim Simpson, why he fought, and continues to fight for civil liberties, when he asked that I read the Regina Manifesto.