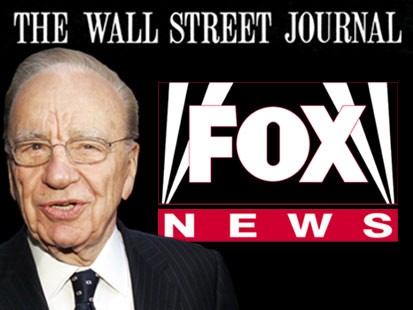 Nailing Rupert Murdoch for his employees’ phone tapping or bribery would be a little like bringing down Al Capone for tax fraud, or George W. Bush for torture. I’d be glad to see it happen but there’d still be something perverse about it.

I remember how outraged Americans were in 2005 learning about our government’s warrantless spying, or for that matter how furious some of my compatriots become when a census form expects them to reveal how many bathrooms are in their home.

I’m entirely supportive of outrage. I just have larger crimes in mind. Specifically this:

International Covenant on Civil and Political Rights:
Article 20
1. Any propaganda for war shall be prohibited by law.

The Fox News Channel is endless propaganda for war, and various other deadly policies. As Robin Beste points out,

“Rupert Murdoch’s newspapers and TV channels have supported all the US-UK wars over the past 30 years, from Margaret Thatcher and the Falklands war in 1982, through George Bush Senior and the first Gulf War in 1990-91, Bill Clinton’s war in Yugoslavia in 1999 and his undeclared war on Iraq in 1998, George W. Bush’s wars in Afghanistan and Iraq, with Tony Blair on his coat tails, and up to the present, with Barack Obama continuing the wars in Afghanistan and Iraq and now adding Libya to his tally of seven wars.”

In this video, Murdoch confesses to having used his media outlets to support the Iraq War and to having tried to shape public opinion in favor of the war. That is the very definition of propaganda for war.

The propaganda is, also by definition, part of the public record. Although that record speaks for itself, Murdoch has not been shy about adding his commentary. The week before the world’s largest anti-war protests ever and the United Nation’s rejection of the Iraq War in mid-February 2003, Murdoch told a reporter that in launching a war Bush was acting “morally” and “correctly” while Blair was “full of guts” and “extraordinarily courageous.” Murdoch promoted the looming war as a path to cheap oil and a healthy economy. He said he had no doubt that Bush would be “reelected” if he “won” the war and the U.S. economy stayed healthy. That’s not an idle statement from the owner of the television network responsible for baselessly prompting all of the other networks to call the 2000 election in Bush’s favor during a tight race in Florida that Bush actually lost.

Murdoch’s support for the Iraq War extended to producing support for that war from every one of his editors and talking heads. It would be interesting to know what Murdoch and Blair discussed in the days leading up to the war. But knowing that would add little, if anything, to the open-and-shut case against Murdoch as war propagandist. Murdoch had known the war was coming long before February 2003, and had long since put his media machine behind it.

Murdoch has been close to Blair and has now published his book — a book that Blair has had difficulty promoting in London thanks to the protest organizing of the Stop the War Coalition. Yet Murdoch allowed Mick Smith to publish the Downing Street Memos in his Sunday Times. Murdoch’s loyalty really seems to be to his wars, not his warmakers.

“When the war in Iraq began, the three international leaders who were most ardently committed to the project were US President Bush, British Prime Minister Tony Blair and Australian Prime Minister John Howard. On paper, they seemed like three very different political players: Bush was a bumbling and inexperienced son of a former president who mixed unwarranted bravado with born-again moralizing to hold together an increasingly conservative Republican Party; Blair was the urbane ‘modernizer’ who had transformed a once proudly socialist party into the centrist ‘New Labour’ project; Howard was the veteran political fixer who came up through the ranks of a coalition that mingled traditional conservatives and swashbuckling corporatists.

“But they had one thing in common. They were all favorites of Rupert Murdoch and his sprawling media empire, which began in Australia, extended to the ‘mother country’ of Britain and finally conquered the United States. Murdoch’s media outlets had helped all three secure electoral victories. And the Murdoch empire gave the Bush-Blair-Howard troika courage and coverage as preparations were made for the Iraq invasion. Murdoch-owned media outlets in the United States, Britain and Australia enthusiastically cheered on the rush to war and the news that it was a ‘Mission Accomplished.'”

Bribery is dirty stuff. So is sneaking a peak at the private messages of murder victims. But there’s something even dirtier: murder, murder on the largest scale, murder coldly calculated and played out from behind a desk, in other words: war.

Murdoch is a major crime boss being threatened with parking tickets.

I hope he’s brought down, but wish it were for the right reasons.