A longtime CIA officer who spent 21 years in the Middle East is predicting that Israel will bomb Iran in the fall, dragging the United States into another major war and endangering US military and civilian personnel (and other interests) throughout the Middle East and beyond.

Earlier this week, Robert Baer appeared on the provocative KPFK Los Angeles show Background Briefing, hosted by Ian Masters. It was there that he predicted that Israeli Prime Minister Binyamin Netanyahu is likely to ignite a war with Iran in the very near future.

Robert Baer has had a storied career, including a stint in Iraq in the 1990s where he organised opposition to Saddam Hussein. (He was recalled after being accused of trying to organise Saddam’s assassination.) Upon his retirement, he received a top decoration for meritorious service.

Baer is no ordinary CIA operative. George Clooney won an Oscar for playing a character based on Baer in the film Syriana (Baer also wrote the book).

He obviously won’t name many of his sources in Israel, the United States, and elsewhere, but the few he has named are all Israeli security figures who have publically warned that Netanyahu and Defense Minister Ehud Barak are hell-bent on war. 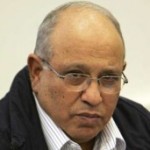 Baer was especially impressed by the unprecedented warning about Netanyahu’s plans by former Mossad chief Meir Dagan. Dagan left the Israeli intelligence agency in September 2010. Two months ago, he predicted that Israel would attack and said that doing so would be “the stupidest thing” he could imagine. According to Haaretz:

When asked about what would happen in the aftermath of an Israeli attack Dagan said that: “It will be followed by a war with Iran. It is the kind of thing where we know how it starts, but not how it will end.”

The Iranians have the capability to fire rockets at Israel for a period of months, and Hizbollah could fire tens of thousands of grad rockets and hundreds of long-range missiles, he said.

According to Ben Caspit of the Israeli daily Maariv, Dagan’s blasts at Israel’s political leadership are significant not only because Mossad chiefs, in office or retired, traditionally have kept their lips sealed, but also because Dagan is very conservative on security matters.

Caspit writes that Dagan is “one of the most rightwing militant people ever born here. … When this man says that the leadership has no vision and is irresponsible, we should stop sleeping soundly at night”.

Dagan describes the current Israeli government as “dangerous and irresponsible” and views speaking out against Netanyahu as his patriotic duty.

And his abhorrence of Netanyahu is not uncommon in the Israeli security establishment. According to Think Progress, citing the Forward newspaper, 12 of the 18 living ex-chiefs of Israel’s two security agencies (Mossad and Shin Bet), are “either actively opposing Netanyahu’s stances or have spoken out against them”. Of the remaining six, two are current ministers in Netanyahu government, leaving a grand total of four out of 18 who independently support the prime minister.

In short, while Congress dutifully gives Netanyahu 29 standing ovations, the Israelis who know the most about both Netanyahu and Israel’s strategic situation think he is a dangerous disaster.

But according to Baer, we ain’t seen nothing yet.

There is almost “near certainty” that Netanyahu is “planning an attack [on Iran] … and it will probably be in September before the vote on a Palestinian state. And he’s also hoping to draw the United States into the conflict”, Baer explained.

The Israeli air force would attack “Natanz and other nuclear facilities to degrade their capabilities. The Iranians will strike back where they can: Basra, Baghdad”, he said, and even Afghanistan. Then the United States would jump into the fight with attacks on Iranian targets. “Our special forces are already looking at Iranian targets in Iraq and across the border [in Iran] which we would strike. What we’re facing here is an escalation, rather than a planned out-and-out war. It’s a nightmare scenario. We don’t have enough troops in the Middle East to fight a war like that.” Baer added, “I think we are looking into the abyss”.