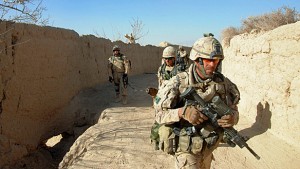 If you had to rely on mainstream media reports or the latest government press release, you would think that Canada had completely left Afghanistan. Most discussions about Canada’s mission focus exclusively on whether the combat role has been a success or failure. What is absent is a critical look at the continuing role of Canadian forces in “training” Afghan troops and any analysis of how the initially stated goals of war have changed. What has been achieved in the last ten years of the war, including Canada’s role? And what is expected in this new phase of the occupation?

Canada will continue to have almost 1,000 troops in Afghanistan—ostensibly, to train the Afghan army and police. The Harper government hopes that the new mission will be more palatable to a war-weary Canadian public, and has used a series of arguments to justify it.

Harper claims that the training mission will be safe for Canadian troops, since they will no longer be in direct combat. This is by far the most often cited argument by Harper to convince Canadians to keep troops in the country but it is untrue for a number of reasons. First, it is often the case that trainers accompany their recruits on missions to assess their combat readiness and training. These could be dangerous missions for Canada, not least because they will be backing an army and police forces that have very little support among the Afghan people.

It is also the case that Kabul is not as safe as Harper would have you believe. Recently, there has been a series of high-profile attacks, such as the assault on the Hotel Intercontinental and the recent killings of Karzai advisor, Jan Mohammad Khan, and Afghan Member of Parliament, Mohammad Hashim Watanwal. All these attacks have happened in Kabul. In the last year, there have also been many cases of attacks on NATO trainers by Afghan recruits themselves. The recent assassinations of Kandahar strong-man, Ahmad Wali Karzai (a half-brother of Afghan president Hamid Karzai) and of Kandahar mayor Ghulam Haidar Hamidi demonstrate the rising tide of opposition to the central state overall.

It is also a problem that the training role continues to build support for a deeply corrupt Afghan government. Any support for this government—whether by training or combat—is against the wishes of the Afghan people, who have increasingly shown their dislike of NATO troops and the Afghan state. The corruption of the Afghan government has made poverty endemic, despite resources from foreign aid. The situation has fueled widespread resentment towards Karzai and his backers. More than half the Afghan people have at some point had to pay bribes to government officials. A recent UN report shows that corruption is the highest concern for the people, even higher than security.

A recently released poll conducted by the International Council on Security and Development found that 87 per cent of southern Afghans and 76 per cent of those in the north oppose NATO’s actions in the country.

There are also ongoing domestic costs to the training mission. According to Parliamentary budget officer Kevin Page, it could reach as much as $3 billion. To put that into perspective, $3 billion is enough money to hire an additional 37,000 nurses in Canada. In the context of an ongoing economic crisis, those resources should be used for human need, and not to support a corrupt government.

Canada’s ongoing contribution to NATO’s war in Afghanistan is not a minor issue. It is a central plank in the Harper government’s foreign policy. Billions of dollars are being spent on propping up a corrupt government that continues to be dominated by drug-running warlords. Canada’s troop deployment also means that we will likely see more innocent Afghans handed over to the dreaded national directorate of security, which is known to torture detainees. We have to end our government’s complicity in these acts.

The Department of National Defence has attempted to defend the mission in Afghanistan by citing the progress made in the country, but a quick look at the statistics reveals a sharp difference between the perception and the reality.

In order to assess the outcome of Canada’s five-year combat role, one should examine the justifications for Canada’s role in the first place. This is always difficult, mainly because government officials have continually moved the goalposts, repeatedly revising the reasons for deployment. These are just a few of them:

To end the terrorist threat posed by the Taliban and its Al-Qaeda allies: This was the first justification, repeated in the wake of 9/11 to generate support for Canadian participation in the US-led “war on terror.” It was also the reason for the shift from “peacekeeping” in Kabul to the combat mission in Kandahar, as made clear by General Rick Hillier’s infamous speech about “detestable murderers and scumbags” speech in July 2005.

The Taliban, however, and the other resistance groups in Afghanistan have grown stronger over the past five years. In fact, this strength has led NATO countries to change course dramatically. They are now actively courting the Taliban for a negotiated settlement.

Even worse for NATO, the resistance has expanded its attacks—many of them increasingly bold—to Kabul and other allegedly safe areas of the country. There is a high level of resistance activity in 97 per cent of the country. The lack of security is acute, demonstrating the failure of NATO forces to create a secure state in Afghanistan. The UN estimates that levels of violence are up 15 per cent in the first six months of this year.

To build a democratic state to Afghanistan: From the beginning, this was a smokescreen. Elements of the Taliban and the Northern Alliance, as well as well known warlord groups, were appointed to the Afghan government in the early days of the war. Subsequent elections have only entrenched these forces. While Karzai has made countless commitments to end government corruption, his actions have achieved the complete opposite. Most of the corrupt leadership welcomed into the Jirga in 2001 has gained considerably more power over the years.

There is absolutely no indication that the NATO occupation has changed this fact, or even attempted to challenge it in any serious way. Nor should we expect it to do so in the future. In fact, NATO countries have steadfastly continued to support the same government officials that have profited handsomely by pocketing international aid. As a result, Afghanistan sits at 176 on a list of 180 countries in terms of corruption, according to Transparency International. That represents a staggering jump from 117 in 2005.

Other sources have also identified rampant corruption in Afghanistan. The UN Office on Drugs and Crime (UNODC) estimates that the total amount paid by Afghans in bribes to various levels of state officials is equivalent to 23 per cent of GDP.

To deliver humanitarian relief to Afghanistan: Justifications for the war based on humanitarian appeals were widespread, but even these have ended in failure. While much has been said about reconstruction efforts, the scale of those attempts is wholly inadequate. The result has been a steady decline in the standard of living for most Afghans. Afghanistan has dropped on the UN Human Development index to 181 out of 182 countries.

And for every success story about NGO-led projects, there are many more about corrupt and unscrupulous aid groups that have fattened their bottom-line without making any positive difference for ordinary Afghans. In addition, the continued bombing runs on the country have done far more to destroy it than to rebuild it.

To liberate Afghan women: Again, while there have been some very high-profile cases of women being allowed to go to school (predominantly in Kabul), the overall trajectory for women has been unchanged since the years of Taliban rule. A recent survey on women’s rights internationally shows Afghanistan to be the worst country in the world for women, with levels of poverty and violence unchanged since the NATO-led invasion.

With the war in Afghanistan already spilling its orders into Pakistan, there is unlikely to be any real change in the condition of the people of the region. In fact, President Obama’s troop draw-down (which will reduce troop levels to the same numbers as when he entered office) will be accompanied by more unmanned drone attacks and covert operations which have killed thousands of innocents in Afghanistan and countless more civilians in Pakistan.

This war has always been about western economic and geo-political interests, rather than about helping the Afghan people. The Harper Government is whitewashing the role of our forces to make further deployments more acceptable to the Canadian people.

The war isn’t over, no matter how much Harper says it is.

← Somalia: the real causes of famine
Stand on guard for creeping militarism →