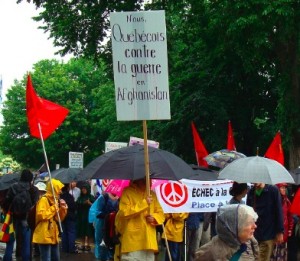 While foreign policy was rarely mentioned or discussed during the election campaign, a bold new post-vote thesis is emerging, one in which Liberal support for the unpopular Canadian mission in Afghanistan pushed many voters—particularly those in Quebec—into the arms of the NDP.

“If you think about Afghanistan, it may have been more divisive than we thought, it may have played a greater role,” says former diplomat Christopher Westdal, who served as Canada’s ambassador to Russia from 2003 to 2006 and headed several other Canadian missions.

Mr. Westdal notes that voters in Quebec who were looking to cast an anti-Afghan mission vote had only the NDP and the Bloc to look to, and if those voters did not like the Bloc’s separatist vision, they had to vote NDP. Much of the commentary on election night revolved around Quebec’s rejection of sovereignty at the federal level.

In that sense, the Liberal and Conservative consensus on Afghanistan largely hid the divisiveness of the issue in Canada from public view, Mr. Westdal says, or converted it to a footnote within the larger context of a left-versus-right debate over the usefulness of the military. Meanwhile, in Quebec, the Bloc had generally been able to absorb much of the soft nationalist, anti-military votes in the absence of any strong alternative.

Afghanistan aside, former Foreign Affairs deputy minister Gordon Smith says he noticed the French-language televised debate had more international references in terms of both the questions and the leaders’ answers. This alone indicates an increased interest in Quebec in foreign policy.

Craig Scott, director of the Nathanson Centre on Transnational Human Rights, Crime and Security at York University, said that while he believes no policy, either foreign or domestic, played an important role in the election, issues like Afghanistan became a “soft echo” in the background, barely heard over the din of the campaign daily grind, but slowly building up in certain voters’ minds.

And if Afghanistan and foreign policy were major factors in the NDP coming up big, it may be well-placed to carry that success forward, Mr. Scott says. For example, the party boycotted the parliamentary committee examining documents related to the handling of Afghan detainees over fears the committee’s establishment was a delaying tactic. That decision may turn out to be prescient in that it helped the NDP avoid the stain of acquiescence on the Afghanistan file.

“It’s just one brick in the wall in thinking the NDP are a little different from everybody else,” Mr. Scott says.