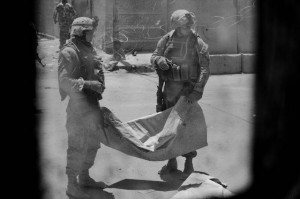 US Marines prepare to collect bodies following a suicide bombing on the outskirts of Fallujah, Iraq, June 26, 2008. Photo: © zoriah/www.zoriah.com

Jess Goodell enlisted in the Marines immediately after she graduated from high school in 2001. She volunteered three years later to serve in the Marine Corps’ first officially declared Mortuary Affairs unit, at Camp Al Taqaddum in Iraq. Her job, for eight months, was to collect and catalog the bodies and personal effects of dead Marines. She put the remains of young Marines in body bags and placed the bags in metal boxes. Before being shipped to Dover Air Force Base, the boxes were stored, often for days, in a refrigerated unit known as a “reefer.”. The work she did was called “processing.”

“We went through everything,” she said when I reached her by phone in Buffalo, N.Y., where she is about to become a student in a Ph.D. program in counseling at the University of Buffalo. “We would get everything that the body had on it when the Marine died. Everyone had a copy of The Rules of Engagement in their left breast pocket. You found notes that people had written to each other. You found lists. Lists were common, the things they wanted to do when they got home or food they wanted to eat. The most difficult was pictures. Everyone had a picture of their wife or their kids or their family. And then you had the younger kids who might be 18 years old and they had prom pictures or pictures next to what I imagine were their first cars. Everyone had a spoon in their flak jacket. There were pens and trash and wrappers and MRE food. All of it would get sent back [to the Marines’ homes].”

“We all had the idea that at any point this could be us on the table,” she said. “I think Marines thought that we went over there to die. And so people wrote letters saying ‘If I die I want you to know I love you.’ ‘I want my car to go to my younger brother.’ Things like that. They carried those letters on their bodies. We had a Marine that we processed and going through his wallet he had a picture of a sonogram of a fetus his wife had sent him. And a lot of Marines had tattooed their vital information under an arm pit. It was called a meat tag.”

The unit processed about half a dozen suicides. The suicide notes, she said, almost always cited hazing. Women, she said, were constantly harassed, especially sexually, but it often did not match the systematic punishment and humiliation meted out to men who were deemed to be inadequate Marines. She said that Marines who were overweight or unable to do the physical training were subjected to withering verbal and physical abuse. They were called “fat nasties” and “shit bags.” The harassed Marines would be assigned to other individual Marines and become their slaves. They would be sent on punishing runs in which many of them vomited. They would be forced to bear-crawl—walk on all fours—the length of a football field and back. This would be followed by sets of monkey fuckers—bending down, grabbing the ankles, crouching down like a baseball catcher and then standing up again—followed by a series of other exercises that went on until the Marines collapsed.

“They make these Marines do what they call ‘bitch’ work,” Goodell said. “They are assigned to be someone else’s ‘bitch’ for the day. We had a guy in our platoon, not in Iraq but in California, and he was overweight. He was on remedial PT, which meant he went to extra physical training. When he came to work he was rotated. One day he was with this corporal or this sergeant. One day he was sent to me. I had him for an hour. I remember sending him outside and making him carry things. It was very common for them to dig a hole and fill it back up with sand or carry sand bags up to the top of a hill and then carry them down again.”

The unit was sent to collect the bodies of the Marines who killed themselves, usually by putting rifles under their chins and pulling the trigger.

“We had a Marine who was in a port-a-john when he blew his face off,” she said. “We had another Marine who shot himself through the neck. Often they would do it in the corner of a bunker or an abandoned building. We had a couple that did it in port-a-johns. We had to go in and peel and pull off chunks of flesh and brain tissue that had sprayed the walls. Those were the most frustrating bodies to get. On those bodies we were also on cleanup crew. It was gross. We sent the suicide notes home with the bodies.”

“We had the paperwork to do fingerprinting, but we started getting bodies in which there weren’t any hands or we would get bodies that were just meat,” said Goodell, who in May will publish a memoir called “Shade It Black: Death and After in Iraq.” The book title refers to the form that required those in the mortuary unit to shade in black the body parts that were missing from a corpse. “Very quickly it became irrelevant to have a fingerprinting page to fill out. By the time we would get a body it might have been a while and rigor mortis had already set in. Their hands were usually clenched as if they were still holding their rifle. We could not unbend the fingers easily.”

← “One day it could be you.” – The persecution of Mohamed Harkat
Libya and the Hypocrisy of US Foreign Policy →