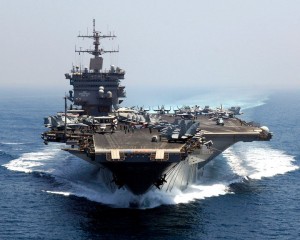 If you are feeling a sense of déjà vu watching the US (and its “allies”) bombing Libya, you are probably not alone. We have been here before: watching a hypocritical U.S (possibly the most brutal and murderous regime in history) bomb another murderous regime (that the US, UK and Canada, etc. of course very recently supported and helped to keep in power) under the false claim of helping “the people.”

This is the new mode of Empire; humanitarian imperialism masquerading as “humanitarian intervention.” One look at the facts demonstrates the brazen hypocrisy of this latest “humanitarian mission.” So here are some points to ponder:

It appears you are only an Islamic fundamentalist, terrorist or brutal dictator if you do not willingly hand over control of your oil/resources to the US and/or its allies.

Where was the US condemnation of a state attack on an unarmed concentrated civilian population, when the occupying Israeli State mercilessly attacked and bombarded the civilian population of Gaza with everything in their arsenal in 2008? This included internationally banned weapons such as white phosphorous and cluster bombs, in addition to depleted uranium—i.e., waste from power plants; ironically and hypocritically, the release of which the world is currently fretting over in Japan. And let us not forget the over one million dead in Iraq from America’s ongoing “humanitarian intervention” there, and the fact that more radioactive material has been dumped on the people of Iraq from the use of DU weapons than could ever be released from the six crippled reactors in Fukushima.

The hypocrisy is not the US’s alone. Russia recently condemned the bombing of Libya and called for its cessation; as did China. But don’t Russia and China have veto power in the UN? If they are so concerned with the bombing of Libya, why did they allow it in the first place?

Whether or not Gadaffi is a bad man and a despot is not the issue here, we can all assume that he is a domestic tyrant. But do international tyrants, whose hands are figuratively dripping with the blood and tears of the human misery of millions around the globe, have any right to claim moral superiority while creating more human misery in order to depose a leader that they very recently supported (in order to gain strategic control over the resources of his country, whatever the human cost)?

Yes, sadly this is all too familiar, as the plans for attacking Libya and regime change there has likely been on the Pentagon’s to do list since at least when George W. Bush’s administration included Libya as one of the original failed/rogue states that comprised the “axis of evil.” [1] All that is needed is a pretext to “intervene.”

The people’s uprisings and resultant state violence are being exploited by the U.S imperial power.  The Empire is using Arab and North African uprisings to its advantage; it duplicitously intervenes on the “behalf” of certain people in revolt and/or resistance while helping to oppress and murder others (i.e., in Bahrain, Yemen, Gaza). The blatant hypocrisy can only leave one dumbfounded and indignant!

[1] Bush’s “axis of evil” included Iran, Iraq, and North Korea.  On May 6, 2002 future United States UN Ambassador John R. Bolton gave a speech entitled “Beyond the Axis of Evil”, wherein he added three more nations to be grouped with the already mentioned “rogue states”: Libya, Syria, and Cuba. This is also around the time that Gaddafi became a U.S stooge (or at least attempted to paint himself as such)

© Copyright Ghada Chehade, Global Research, 2011
The url address of this article is: www.globalresearch.ca/index.php?context=va&aid=23826

← The Body Baggers of Iraq
After Sendai →