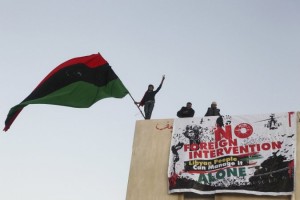 Statement from the Canadian Peace Alliance

The Government of Canada has announced that it will send HMCS Charlottetown to Libya to join the US aircraft carrier fleet led by the USS enterprise. This is part of a much larger NATO led buildup in the area. The Canadian Peace Alliance is opposed to any military intervention in Libya or in the region as a whole.

If the western governments were genuine in their desire to help the people of Libya – or Egypt or Tunisia for that matter – they would not have supported the dictators and their regimes. That support for the dictators is a chief reason why the situation is so violent for the people rising up. Western military deployment to Libya is a bit like asking the arsonist to put out their own fire. Far from being a shining light in a humanitarian crisis, western intervention is designed to maintain the status quo and will, in fact make matters worse for the people there.

Western intervention only serves to install compliant and corrupt dictatorial regimes. The people of Tunisia, Egypt and Libya have done more to bring peace and democracy to their countries than years of US-led military occupations in Iraq and Afghanistan. The west needs to learn the lessons from those failed invasions and not compound the crisis in Libya.

US and Canadian interests lie in keeping North Africa a compliant bulwark in their plans for control over the entire region. Canadian and US corporations have been quietly making billions while supporting the Qaddafi regime. For example, Calgary based Suncor energy pumps more than $5 million each day from Libyan oilfields and SNC-Lavalin has been working on everything from construction of a new airport in Benghazi to building prisons for the Libyan government. All told, SNC -Lavalin has $1 billion in contracts for construction in North Africa.

The best way to help the people of Libya is to show our solidarity with their struggle. There are demonstrations planned all over Canada this weekend. Please see: http://www.acp-cpa.ca/en/ArabSolidarity.html for more information.

← Reels for Libya
Rally: Stop US drone attacks on Pakistan →