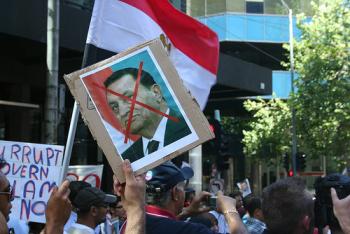 The photographs are as stunning as they are inspiring. The world is now totally focused on the democratic rebellion in Egypt. President Hosni Mubarak, the dictator who Israel relies on for its current unassailable position, sends out the army to deal with demonstrators and what happens? The soldiers, including officers, joined with them, hugging them, kissing them, shaking hands and sharing posters and banners calling on Mubarak — a coward and autocrat in the pocket of the U.S. and Israel — to resign, and demanding democracy.

Mubarak is finished so he no longer really needs to be afraid. The millions he has socked away in Swizz banks will serve him well unless someone assassinates him before he can spend it. No, the people who should be terrified are those in the Israeli government and political elite who for decades have treated Palestinians with racist brutality — worse than anything experienced under Apartheid in South Africa — with complete impunity.

The arrogance of Israel — and its delusional certainty that it can prevail virtually forever with its policies — is suddenly confronted by a new reality that all the colonial genius of the country could not and did not anticipate. The tens of thousands of Egyptian — and Jordanian and Algerian and Yemeni — citizens demanding democracy are calling Israel’s bluff. For decades Israel has been able to ridicule and thumb its nose at the nasty little dictatorships of the Arab world — arguing that only Israel was democratic.

The implication was clear: wouldn’t it be great of all the Arab states were democratic. Of course nothing could be further from the truth. What has kept Israel protected during its decades of illegal occupation, the seizure of Palestinian land and resources and its military adventures against Iran, Syria and Lebanon — along with unlimited U.S. support — is the certain knowledge that the corrupt and morally bankrupt regimes surrounding it would never dare risk a confrontation.

No more. Overnight this comforting picture is in doubt. Nothing frightens Israel more than the prospect of democratic Arab regimes actually responding to the will of their populations — a will that includes dealing with the oppression of the Palestinian people. And while it may not be at the top of their lists of demands it is always there — a powerful and humiliating symbol of Israeli power and intransigence. It gnaws at the heart of every Arab with even a modicum of nationalist sentiment. If these regimes become democratic it is only a matter of time that they will be obliged to deal with the Palestinian question.

If there was any doubt that the place and role of Israel in the Middle East is threatened by the young people — and not so young — in the streets all you have to do is look at the response of President Barack Obama (and Canada). Obama in an official news conference response to the Egyptian developments stated that the U.S. was “calling upon the Egyptian authorities to refrain from any violence against peaceful protesters. The people of Egypt have rights that are universal including rights to peaceful assembly …free speech …and the right to determine their own destiny. These are human rights. I also call on the Egyptian government to reverse its actions they’ve taken to interfere with access to the internet, cell phones and social networks which do so much to connect people in the 21st century… We have been clear that there must be reforms — political, social and economic reforms that meet the aspirations of the Egyptian people.”

← Revival of a Military Option: Israel’s Covert War Against Iran Is On
Winnipeg Protest for Egypt →