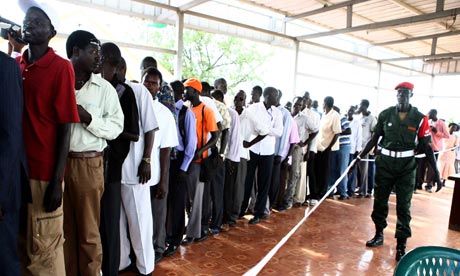 KHARTOUM, Dec. 23 (Xinhua) — As 2010 is drawing near to an end, the Sudanese people are gripped by anxiety for a new year that could see their country split in two and fears that violence may follow.

Following decades of civil fighting, Sudan, the biggest country in Africa, faces a possibility of being divided if voters in a Jan. 9 self-determination referendum in the south opted for separation.

As the countdown continues for the vote, president of the Khartoum-based government Omar al-Bashir has done his utmost to persuade the southerners into opting for unity. Yet, an overwhelming “yes” vote is expected in favor of secession.

Away from the south, the situation in the country’s war-torn region of Darfur did not see the much-anticipated breakthrough as peace talks between the government and the rebels failed to produce a deal.

ANOTHER TERM FOR BASHIR

The year 2010 saw the country’s presidential and legislative elections, which resulted in a sweeping victory for the ruling National Congress Party (NCP) in the north and the Sudan People’s Liberation Movement (SPLM) in the south.

Bashir managed to win a second five-year presidential term of office with 68 percent of the vote. His party swept the polls, winning more than 95 percent of the seats available in the north of the country.

But many opposition parties boycotted the election, accusing the president’s party of having rigged the result.

Bashir faced an arrest warrant from the International Criminal Court for war crimes, but the leader has repeatedly rejected the claims that he ordered mass murder, rape and torture in the Darfur region.

Yet, Bashir’s foreign travel has been severely curtailed because of fear of arrest by nations that recognize the ICC. He has been only visiting African countries, which rejected the ICC warrant because it would undermine peace efforts in Sudan.

In the south, SPLM leader Salva Kiir Mayardit won the presidency of the Government of South Sudan.

A NEW STATE IN SIGHT

In the first landmark decision following the elections, Bashir ordered the establishment of the South Sudan Referendum Commission (SSRC), an independent body entrusted with supervising the conduction of south Sudan referendum.

The referendum is part of a 2005 peace deal that ended 22 years of fighting between the Arab-ruled north and the predominantly Christian south, which left two million dead and scattered millions of refugees.

Around three million voters registered for the referendum in the south, with about 115,000 in the north and almost 500,000 in eight overseas countries.

Yet, the NCP and SPLM are yet to find common ground on the disputed oil-rich region of Abyei which had supposed to be holding a simultaneous vote whether to join the south or north. The vote has been delayed by disagreements over who are eligible to vote.

Amid high tensions in the south, the Khartoum-based government and Sudan People’s Liberation Army (SPLA) traded accusations of unjustified hostility. The unrest reached its peak on Oct. 29 when the SPLA accused the Sudanese army of mobilizing its forces along the border line between the north and south.

Khartoum has already turned down a suggestion that the United Nations would deploy troops on the north-south borders.

According to the UN, as many as 75,000 southerners have left north Sudan to south with convoys of trucks, buses, and barges ahead of the vote. The UN also estimates that up to 800,000 southerners would make the journey in the next six months, a 10 percent increase of the southern population.

The mass exodus has stirred worries that the would-be new state would not be ready to accommodate the new additions of population. With a population of about 8 million, south Sudan is one of the world’s poorest places, where nine out 10 people live in abject poverty and a girl has more chance of dying in childbirth than finishing school.

Besides a difficult humanitarian situation, the outbreak of a new civil strife is also feared despite assurances from both sides that they would respect the outcome of the referendum.

The head of UN peacekeeping mission Alain LeRoy said a new civil war in Sudan could force 2.8 million people from their homes and require 63 million U.S. dollars in emergency aid.

Although UN forces moved to potential hot spots, the peacekeepers would not be able to deter renewal of the civil war by themselves, he warned.

Regardless of the referendum result, whether unity or separation, the government and the SPLM would face the impacts of many pending bones of contention if not solved before July 2011 when the transitional period would end along with the CPA.

Among these areas of concern are the security arrangements. Sudan has three armies including the army in the north, the SPLA ( south Sudan army) and the Joint Integrated Military Units which are composed of the north and south Sudan armies.

The CPA, inked between north and south Sudan, stipulates that the joint integrated units should constitute a nucleus of post- referendum army of Sudan in three months if the referendum resulted in unity of the Sudan, otherwise they would be dissolved.

As Southern Sudan prepares for January’s independence referendum, there are concerns over the voting rights of traditional communities. The Sulaim Arab nomads of Upper Nile State have been living in the south for five centuries. But they have no right to vote and they may lose their citizenship if Sudan is split in two. Al Jazeera’s May Welsh reports.

People & Power travels the Nile River into Southern Sudan to discover what divides the Sudanese. Watch the current sweeping a nation toward its destiny. Al Jazeera’s May Welsh reports.