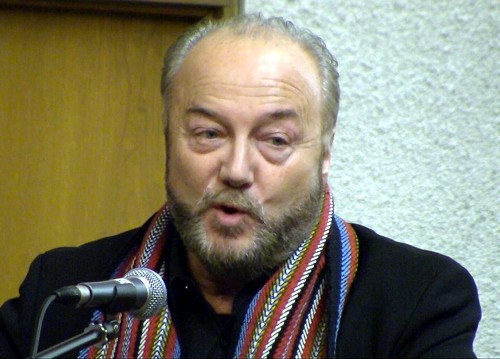 It lasted over 18 months, but Jason Kenney’s attempt to ban George Galloway ended in complete and utter failure. On November 27, the former British MP, who was declared inadmissible to Canada in March 2009, joined hundreds of supporters on Parliament Hill in Ottawa where he completed an 11-city, 12-day pan-Canadian speaking tour. In just under two weeks, Galloway sprinted across the country at break-neck speed, addressing in person nearly 8,000 people at sold-out meetings, reaching hundreds of thousands more through wall-to-wall media coverage.

“As any bookseller will tell you, the book you try to ban always ends up on the best-seller list,” Galloway quipped in Ottawa. “Thanks to Jason Kenney, I have drawn thousands to my speaking events all across Canada.”

What Kenney was trying to ban was not just Galloway himself, but his criticism of Canadian foreign policy on Afghanistan and the Middle East. Federal Court Justice Richard Mosley, in his 60-page decision that cleared the way for Galloway’s return to Canada, agreed: “[T]he evidence is that the government wished to prevent Mr. Galloway from expounding his views on Canadian soil… [T]he concern with Galloway’s anticipated presence in Canada related solely to the content of the messages that the [government] expected him to deliver” (paragraph 86).

The attempted ban was initiated by Alykhan Velshi — Kenney’s Director of Communications — who communicated directly with senior bureaucrats in the Canada Border Services Agency (CBSA), pressuring them to find Galloway inadmissible in a preliminary assessment. The CBSA, acting on the online “evidence” provided by Velshi, dutifully ruled Galloway inadmissible in record time, just under two hours.

As the court records show, the process implicated the Canadian Security Intelligence Agency (CSIS), which ruled that Galloway was not a threat to Canada’s security; the Canadian High Commissioner in London, who objected to the ban; and the Prime Minister’s Office, which gave the ban its blessing. You can read the full e-mail exchange here.

Even more interesting is how much the government changed its line as more and more evidence of political interference became available to the public. In March 2009, Velshi told the British tabloid the Sun: “George Galloway is not getting a permit — end of story. He defends the very terrorists trying to kill Canadian forces in Afghanistan.” Velshi’s commentary appeared in the British media eight hours before the Canadian High Commission officially notified Galloway of his inadmissibility, a breach of Canada’s Privacy Act.

Velshi later boasted to the Guardian: “I’m sure Galloway has a large Rolodex of friends in regimes elsewhere in the world willing to roll out the red carpet for him. Canada, however, won’t be one of them.”

But Velshi’s arrogance quickly evaporated. Government lawyers attempted to separate Kenney from his staff’s behaviour, describing Velshi’s comments as “unfortunate expressions of opinion.” Not long after Galloway launched his case in the Federal Court of Canada, Kenney’s office suddenly fell silent, likely on the advice on its exasperated legal team.

Despite his unofficial stance of silence, Kenney nevertheless continued to fight Galloway in the Court — even invoking “national security” claims in order to prevent the full disclosure of damning evidence against Kenney. When the Canadian High Commission released to Galloway’s lawyers the embarrassing record of e-mail exchanges that reveals Kenney’s role in the ban, government lawyers filed a motion, demanding that the record be returned immediately (document 41). Galloway’s lawyers successfully resisted, as Justice Mosley eventually released the record to the public.

By the time the case was finally heard in Federal Court on April 28, 2010, the official line from Kenney’s office had morphed into the opposite of what it had argued a year earlier. Instead of boasting about the ban, as it did to most of the British media in 2009, Kenney’s office now claimed that there was never a ban in the first place! In much more cautious language, government lawyers argued that there was only a preliminary assessment of inadmissibility, and that no final decision had ever been made because Galloway never appeared at the border to test the assessment.

Justice Mosley ultimately agreed with this technicality. On September 27, he dismissed Galloway’s case, but not before issuing a 60-page decision that condemned the political interference of Kenney’s office. Justice Mosley also made clear that any future decision by the CBSA to ban Galloway would have no credibility: “Had Galloway actually been found inadmissible by a visa officer relying on the preliminary assessment and the alerts sent to the border points, I would have had little difficulty in concluding that the officer’s discretion had been fettered by the process followed in this case and that the e-mails and statements to the press raised a reasonable apprehension of bias” (paragraph 148). More than anything else, this cleared the way for Galloway’s swift return to Canada.

Just two days after the ruling, Galloway announced plans to return to Canada by the weekend — confounding mainstream media that had smugly trumpeted his “loss” in court. On Oct. 2, Galloway arrived at Pearson Airport in Toronto where he was met by a crush of journalists and dozens of cheering supporters. The next day, he addressed a sold-out audience of nearly 800 people at a downtown church. During his speech,Galloway said: “Jason Kenney, I’m challenging you to a public debate — anywhere, anytime, any place, in any venue that you choose.” Not surprisingly, Kenney never responded. Galloway later called for Kenney’s resignation, and announced plans for a pan-Canadian speaking tour, entitled: “Free Afghanistan. Free Palestine. Free Speech.”

Six weeks later, the tour began at York University, where 500 students packed a lecture hall to hear Galloway speak. Pro-Israel advocacy groups had campaigned to keep Galloway off campus, but failed to convince the university administration. Instead, about 50 people attempted to disrupt the meeting at a demonstration led by Hillel of Greater Toronto. But not even a bomb threat — phoned in about 30 minutes before Galloway was scheduled to appear — could stop the meeting from happening.

The success of the York event was replicated everywhere: in Montreal, Galloway addressed nearly 500 people at the Université du Québec à Montréal; over 400 at a local church hall in Halifax; over 1,000 at an Islamic Centre in Richmond Hill, Ontario; over 600 at McMaster University in Hamilton; nearly 1,200 at a downtown church in Vancouver, the biggest event on the tour; over 800 at the University of Calgary, just hours after visiting Jason Kenney’s constituency office; close to 200 at a community centre in Yellowknife; almost 600 at the University of Alberta in Edmonton; about 400 at a local church in Winnipeg; and nearly 900 in Ottawa, followed by a march of hundreds to Parliament Hill.