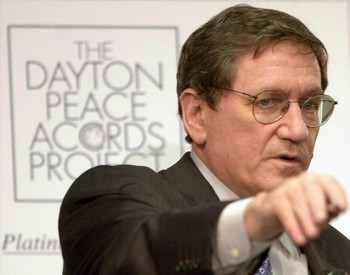 For all the talk of strategic counterinsurgency that oozes out of Washington, and all the manuals explaining that 80% of our investment in a nation-building operation should be civilian, we’ve been investing about 3% of our efforts in Afghanistan into a civilian project the leader of which has described it as a way to support the military. That leader was, until he died yesterday, Richard Holbrooke.

Asked at a U.S. Senate hearing earlier this year what in the world he was doing and toward what end in Afghanistan, Holbrooke repeatedly failed to produce an answer. That could explain his deathbed conversion and his final words to his surgeon: “You’ve got to stop this war in Afghanistan.” As if his doctor could do what he refused to play any role in.

Before any more makers of war break their own hearts and beg for forgiveness, they should follow the examples of people like Ann Wright and Matthew Hoh and get out of this dirty business themselves while they have some life left in them.

This short excerpt from War Is A Lie is relevant here:

When, in 1995, Croatia had slaughtered or “ethnically cleansed” Serbs with Washington’s blessing, driving 150,000 people from their homes, we weren’t supposed to notice, much less drop bombs to prevent it. The bombing was saved for Milosevic, who — we were told in 1999 — refused to negotiate peace and therefore had to be bombed. We were not told that the United States was insisting on an agreement that no nation in the world would voluntarily agree to, one giving NATO complete freedom to occupy all of Yugoslavia with absolute immunity from laws for all of its personnel.

“An unimpeachable press source who regularly travels with Secretary of State Madeleine Albright told this [writer] that, swearing reporters to deep-background confi dentiality at the Rambouillet talks, a senior State Department official had bragged that the United States ‘deliberately set the bar higher than the Serbs could accept.’ The Serbs needed, according to the official, a little bombing to see reason.”

Jim Jatras, a foreign policy aide to Senate Republicans, reported in a May 18, 1999, speech at the Cato Institute in Washington that he had it “on good authority” that a “senior Administration official told media at Rambouillet, under embargo” the following: “We intentionally set the bar too high for the Serbs to comply. They need some bombing, and that’s what they are going to get.”

In interviews with FAIR (Fairness and Accuracy in Reporting), both Kenney and Jatras asserted that these were actual quotes transcribed by reporters who spoke with a U.S. official.

Negotiating for the impossible, and falsely accusing the other side of noncooperation, is a handy way to launch a “defensive” war. Behind that scheme in 1999 was special U.S. envoy Richard Holbrooke.

← Why is Canadian media not reporting Holbrooke’s dying words?
The inhumane conditions of Bradley Manning’s detention →