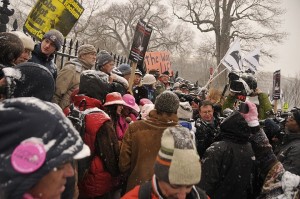 The speeches were over. There was a mournful harmonica rendition of taps. The 500 protesters in Lafayette Park in front of the White House fell silent. One hundred and thirty-one men and women, many of them military veterans wearing old fatigues, formed a single, silent line. Under a heavy snowfall and to the slow beat of a drum, they walked to the White House fence. They stood there until they were arrested.

The solemnity of that funerary march, the hush, was the hardest and most moving part of Thursday’s protest against the wars in Afghanistan and Iraq. It unwound the bitter memories and images of war I keep wrapped in the thick cotton wool of forgetfulness. I was transported in that short walk to places I do not like to go. Strange and vivid flashes swept over me—the young soldier in El Salvador who had been shot through the back of the head and was, as I crouched next to him, slowly curling up in a fetal position to die; the mutilated corpses of Kosovar Albanians in the back of a flatbed truck; the screams of a woman, her entrails spilling out of her gaping wounds, on the cobblestones of a Sarajevo street. My experience was not unique. Veterans around me were back in the rice paddies and lush undergrowth of Vietnam, the dusty roads of southern Iraq or the mountain passes of Afghanistan. Their tears showed that. There was no need to talk. We spoke the same wordless language. The butchery of war defies, for those who know it, articulation.

What can I tell you about war?

War perverts and destroys you. It pushes you closer and closer to your own annihilation—spiritual, emotional and, finally, physical. It destroys the continuity of life, tearing apart all systems, economic, social, environmental and political, that sustain us as human beings. War is necrophilia. The essence of war is death. War is a state of almost pure sin with its goals of hatred and destruction. It is organized sadism. War fosters alienation and leads inevitably to nihilism. It is a turning away from the sanctity of life.

On Thursday December 16th 2010, snow fell as 131 people were arrested in a Civil Disobedience at the White House protesting the continuing wars in Afghanistan, Pakistan and in Iraq. Pulitzer Prize-winning journalist, Chris Hedges provides an extraordinary anti-war soliloquy which is inter-cut with interview of Veterans of the recent wars and with Daniel Ellsberg, who leaked the top secret Pentagon Papers.