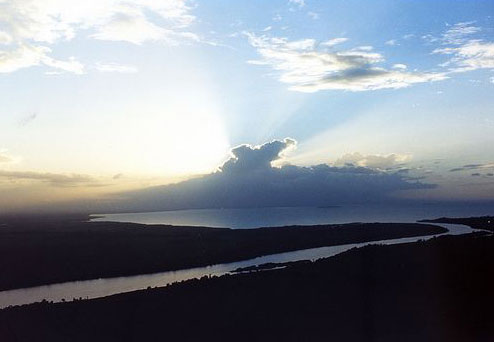 Rio San Juan del Norte empties into the Caribbean Sea along the border between Nicaragua and Costa Rica. The river is renowned for its biodiversity, and is surrounded on the Costa Rican side by the Barra de Colorado National Wildlife Refuge. The entire region around Rio San Juan del Norte is wet, swamp wet. This makes it a great place for various kinds of wildlife, and a place that has no appreciable conventional military value.

I mention that because the Costa Rican government has made a loud public claim that Nicaraguan soldiers have crossed the frontier into Costa Rica, precisely at this place. This claim is an incitement in Costa Rica, where this otherwise pacific culture bears an ugly streak of anti-Nicaraguan xenophobia. And the Costa Rican government is asking for an OAS investigation, which has effectively thrust the whole topic onto the world stage. So why would Nicaragua even consider such a thing – intentionally violating the territorial sovereignty of a neighbor, on a piece of land that has no military value, and around which there is no armed conflict?

Well, that ought to be the question, even if it’s not.

The region had some limited military value during the illegal US war against Nicaragua under the Reagan administration. It hid a small camp of ex-Sandinistas who had joined with the US in trying to topple the Sandinista government. That camp’s inhabitants were led by Eden Pastora, a flamboyant guerrilla from the era, when he had an on-again-off-again relationship with the CIA. Pastora has since mellowed, and recently reconciled with his old enemy and now President Daniel Ortega. Pastora runs a dredging team that works at the mouth of the river; and he is one of many Nicaraguans who claim that a small island – Isla Calero – now under the control of Costa Rica is actually Nicaraguan territory.

This dispute will come up in days to come, because it useful as a red herring.