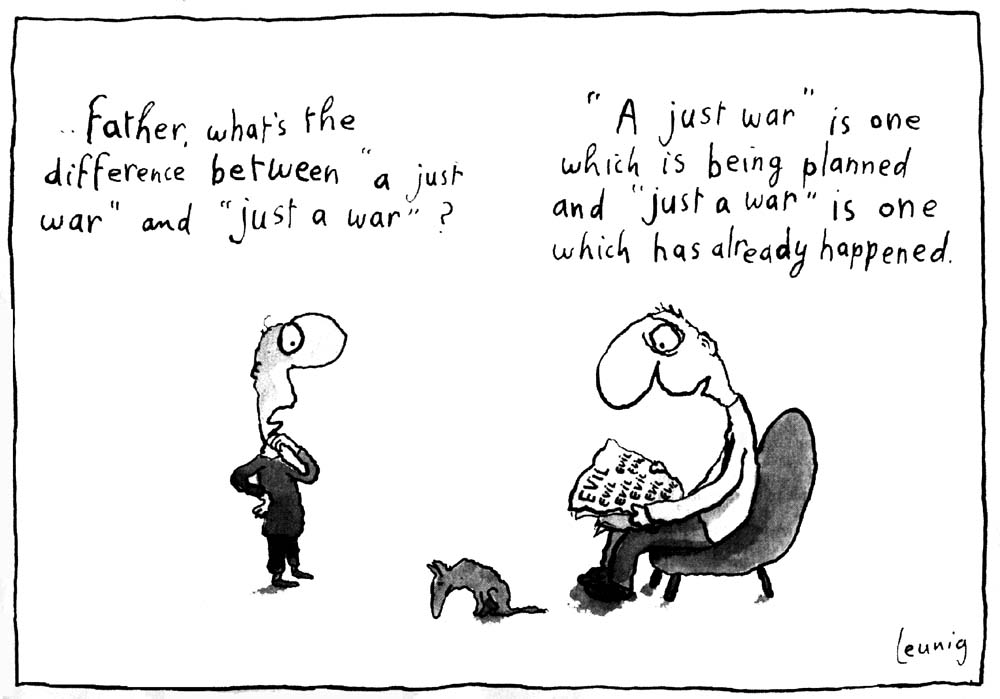 Some of America’s wars are condemned outright, while others are heralded as “humanitarian interventions”. A significant segment of the US antiwar movement condemns the war but endorses the campaign against international terrorism, which constitutes the backbone of US military doctrine.

The “Just War” theory has served to camouflage the nature of US foreign policy, while providing a human face to the invaders. In both its classical and contemporary versions, the Just War theory upholds war as a “humanitarian operation”. It calls for military intervention on ethical and moral grounds against “insurgents”, “terrorists”, “failed” or “rogue states”.

Taught in US military academies, a modern-day version of the “Just War” theory has been embodied into US military doctrine. The “war on terrorism” and the notion of “pre-emption” are predicated on the right to “self defense.” They define “when it is permissible to wage war”: jus ad bellum.

Jus ad bellum has served to build a consensus within the Armed Forces command structures. It has also served to convince the troops that they are fighting for a “just cause”. More generally, the Just War theory in its modern day version is an integral part of war propaganda and media disinformation, applied to gain public support for a war agenda. Under Obama as Nobel Peace Laureate, the Just War becomes universally accepted, upheld by the so-called international community.

The ultimate objective is to subdue the citizens, totally depoliticize social life in America, prevent people from thinking and conceptualizing, from analyzing facts and challenging the legitimacy of the US NATO led war.

The outbreak of the war on Yugoslavia in March 1999 was in many regards a watershed, a breaking point in the development of the “Just War” fought on “humanitarian” grounds. Many sectors of the Left both in North America and Western Europe embraced the “Just War” concept. Many “progressive” organizations upheld what they perceived as “a humanitarian war” to protect the rights of Kosovar Albanians. The war was described as a civil war rather than a US-NATO led bombing and invasion.

At the height of the NATO bombings, several “progressive” writers described the Kosovo Liberation Army (KLA), as a bona fide nationalist liberation army, committed to supporting the civil rights of Kosovar Albanians. The KLA was a terrorist organization supported by the CIA with links to organized crime. Without evidence, the Yugoslav government was presented as being responsible for triggering a humanitarian crisis in Kosovo. In the words of Professor Richard Falk:

“The Kosovo War was a just war because it was undertaken to avoid a likely instance of “ethnic cleansing” undertaken by the Serb leadership of former Yugoslavia, and it succeeded in giving the people of Kosovo an opportunity for a peaceful and democratic future. It was a just war despite being illegally undertaken without authorization by the United Nations, and despite being waged in a manner that unduly caused Kosovar and Serbian civilian casualties, while minimizing the risk of death or injury on the NATO side.”

How can a war be “just”, when it is “being illegally undertaken”, resulting in the deaths of men, women and children?

An illegal war, which constitutes a criminal act is upheld as a humanitarian endeavor.

Several progressive media joined the bandwagon, condemning the “Milosevic regime” without evidence, while at the same time condoning the NATO led war and expressing mitigated support for the KLA. In the words of Stephen Shalom, in a ZNet article:

“I am sympathetic to the argument that says that if people [the KLA] want to fight for their rights, if they are not asking others to do it for them, then they ought to be provided with the weapons to help them succeed. Such an argument seemed to me persuasive with respect to Bosnia.” (quoted in Michael Karadjis, Bosnia, Kosova & the West, Resistance Books, 2000, p. 170).

Human Rights Watch (HRW), which is known to support US foreign policy “urged regime-change for Yugoslavia, either through President Slobodan Milosevic’s indictment or a U.S. war to affect the same outcome.” (Edward S. Herman, David Peterson and George Szamuely, Yugoslavia: Human Rights Watch in Service to the War Party, Global Research, March 9, 2007). According to a HRW Fred Abrahams published in the New York Herald Tribune:

“[T]he international community’s failure to punish Milosevic for crimes in Croatia and Bosnia sent the message that he would be allowed to get away with such crimes again. It is now obvious that the man who started these conflicts cannot be trusted to stop them.” (Fred Abrahams, “The West Winks at Serbian Atrocities in Kosovo,” International Herald Tribune, August 5, 1998. quoted in Edward S. Herman et al, op cit)

Punishing a head of State by waging war on his country?

In 1999, Milosevic was portrayed by the “progressive” British Weekly The Observer, as the “Butcher of Belgrade”. (See Peter Beaumont and Ed Vulliamy, Ten years on, the end of the line, The Observer, 24 June 2001)

The same reasoning was put forth in relation to Saddam Hussein, in the months leading up to the March 2003 bombing and invasion of Iraq. Saddam Hussein was described by the same author of the London Observer as the “Butcher of Baghdad”:

Meanwhile, the names of the “butchers of Washington, London and Brussels”, who waged a “Just War” on the people of Yugoslavia, Afghanistan, Palestine and Iraq are rarely mentioned.