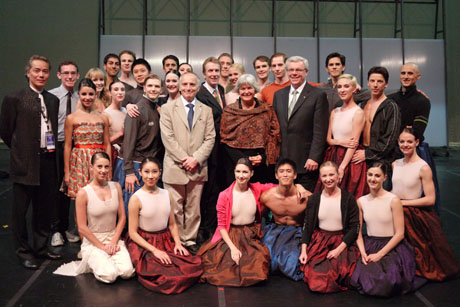 Ten days ago, Greg Selinger, the New Democratic Party (NDP) Premier of the Province of Manitoba, and two of his ministers visited Israel. Among other things, the official delegation strengthened the longtime “progressive” government’s ties to the Jewish National Fund (JNF). The trip was a sad spectacle that should embarrass every Canadian who opposes racism. Indeed, J.S. Woodsworth, the Winnipeg-based founder of Canada’s social democratic party, must be turning in his grave.

The province and JNF signed an accord to jointly develop two bird conservation sites while Manitoba water stewardship Minister Christine Melnick spoke at the opening ceremony for a park built in Jaffa by the JNF, Tel Aviv Foundation and Manitoba-Israel Shared Values Roundtable. During the trip Mel Lazerek, a regional JNF president, was also appointed Manitoba’s special representative to Israel for Economic and Community Relations.

Manitoba’s ties to this openly racist institution are shocking, but also part of a decades-old pro-Israel policy of the NDP that must be challenged by real progressives.

Shutting out Palestinian citizens of Israel, JNF lands can only be leased by Jews. A 1998 United Nations Committee on Economic, Social and Cultural Rights found that the JNF systematically discriminated against Palestinians in Israel. According to the UN report, JNF lands are “chartered to benefit Jews exclusively,” which has led to an “institutionalized form of discrimination.” In 2005, Israel’s high court came to similar conclusions. It found that the JNF, which owns 13 percent of the country’s land and has significant influence over most of the rest, systematically excluded Palestinian citizens from leasing its property.

JNF Canada officials are relatively open about the racist character of the organization. In May 2002, Mark Mendelson, JNF Canada’s executive-director for Eastern Canada, explained that “We are trustees between world Jewry and the land of Israel.” This sentiment was echoed by JNF Canada’s head Frank A. Wilson in July 2009. Wilson stated that the “JNF are the caretakers of the Land of Israel on behalf of its owners, who are the Jewish people everywhere around the world.”

Established in 1910, JNF Canada is one of the most important Israel-focused charities registered in Canada. It raises about $10 million annually in tax-deductible donations. Despite projecting itself as “an environmentally friendly organization concerned with ecology and sustainable development,” it is a linchpin of Zionist colonialism.

The Canadian branch of the JNF has been directly complicit in Palestinian dispossession. At the end of the 1920s, a JNF representative came to Canada to raise $1 million for the lands of Wadi al-Hawarith (or Hefer Plain). A 30,000 dunam (roughly 7,500 acres) stretch of coastal territory located about half way between Haifa and Tel Aviv, the land was home to a Bedouin community of 1,000 to 1,200 persons. Without consulting the Palestinians living on the land, in 1928 the JNF acquired legal title to Wadi al-Hawarith from an absentee landlord in France.

For four years the tenants of Wadi al-Hawarith resisted British attempts to evict them. In All That Remains historian Walid Khalidi explains that “The insistence of the people of Wadi al-Hawarith to remain on their land came from their conviction that the land belonged to them by virtue of their having lived on it for 350 years. For them, ownership of the land was an abstraction that at most signified the landlords’ right to a share of the crop.”

The conflict at Wadi al-Hawarith became a lightning rod for the growing Palestinian nationalist movement. In 1933 a general strike was organized in Nablus to support the tenants of Wadi al-Hawarith. Palestinians, especially those without title to their lands, resented the European influx into their homeland.

Despite repeated attempts, the 5,000 expelled Palestinians were not allowed to return home. A 1986 UN Special Committee reported to the Secretary-General that it considers it “a matter of deep concern that these villagers have persistently been denied the right to return to their land on which Canada Park has been built by the JNF Canada and where the Israeli authorities are reportedly planning to plant a forest instead of allowing the reconstruction of the destroyed villages.”

The JNF Canada, which launched a $7 million campaign to refurbish the park in 2007, replaced most traces of Palestinian history with signs devoted to Canadian donors such as the Metropolitan Toronto Police Department, the City of Ottawa and former Ontario premier Bill Davis. Inaugurated by former Canadian Prime Minister John Diefenbaker in 1975, the Diefenbaker Parkway bisects the park.

In the early 1980s JNF Canada helped finance an Israeli government campaign to “Judaize” the Galilee, the largely Arab northern region of Israel. “The government is building Jewish settlements on our land, surrounding us and turning our villages into ghettos,” Khateeb Raja, mayor of Deir Hanna, a Palestinian-Israeli town in the Galilee, told The Globe and Mail in 1981. Ishi Mimon told the paper that he planned to move his family to the newly settled “Galil Canada” area because “the Galilee should have a Jewish majority.”

JNF Canada’s representative in Israel, Akiva Einis, described the political objective of Galil Canada stating that “The government decided to stop the wholesale plunder (by Israeli Arabs) of state lands [conquered in the 1947/48 war]. … The settlements are all on mountain tops and look out over large areas of land. If an Arab squatter takes a plow onto land that is not his, the settlers lodge a complaint with the police.”

JNF Canada spent tens of millions of dollars ($35 million was the total fundraising target) on 14 Jewish settlements in Galil Canada. In the contested valley of Lotem a stone wall and monument was erected, reported the Globe, with “hundreds of small plaques etched with names and home towns of Canadians who have contributed money to the Galilee settlements.” Most of the donors to Galil Canada were Jewish, “but a Pentecostal congregation in Vancouver, the Glad Tidings Temple, has given $1-million.”

Tawfiz Daggash, Deir Hanna’s deputy mayor, denounced Canadian financial support for the settlements. “I want to say to the people of Canada that every dollar they contribute [to JNF] is helping the Israeli government in its attempt to destroy the Arab people here.”

The JNF has long been supported by key figures in the Canadian political elite. Former Prime Ministers John Diefenbaker, Lester Pearson and Brian Mulroney have all spoken at JNF events and leading politicians continue to endorse the organization. In addition to this political support, the JNF is a registered charity, which means that up to a third of its budget effectively comes from public coffers. Yet Canada is supposed to outlaw institutional racism.

In 2007, Lebanese-Canadian Ronald Saba filed a detailed complaint concerning the JNF’s charitable status with the Canadian Human Rights Commission. The claim was leveled at the “Government of Canada for violating the Canadian Human Rights Act and Canada Revenue Agency Policy Statement CPS-021 by subsidizing racial discrimination through granting and maintaining charitable status for the Jewish National Fund.”

Considering the group’s political connections, it’s not surprising that Canadian officials refused to address Saba’s complaint or follow-up ones (all the documents can be found at Montreal Planet Magazine). With the government’s failure to address Saba’s legitimate complaint, it is now time to launch a political campaign to push the Canada Revenue Agency to revoke the JNF’s charitable status.

Victory won’t be easy but the educational work involved in such an endeavor will be invaluable. With quasi-state status in Israel, the JNF is at the heart of Israeli apartheid and drawing attention to this institution is a way to discuss the racism intrinsic to Zionism.

Real progressives in Canada have never shied away from difficult, but important tasks such as fighting racism wherever it raises its ugly head.

Yves Engler is the author of Canada and Israel: Building Apartheid and The Black Book of Canadian Foreign Policy. For more information visit yvesengler.com.