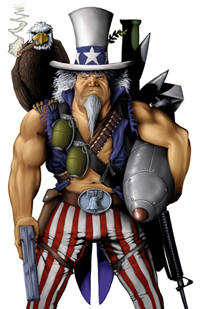 American and NATO troops, including Canadians, will pull out of Afghanistan in 2014 at the latest, unless they don’t. It depends on something but no one knows what that something might be. In his new book Obama’s Wars, Bob Woodward quotes General David Petraeus, the senior U.S. commander in Afghanistan: “I don’t think you win this war. I think you keep fighting. … This is the kind of fight we’re in for the rest of our lives, and probably our kids’ lives.” Dear me, how do I break this to our granddaughter?

Luckily for the general he’s getting full co-operation from his peacenik President. Having campaigned against the Iraq war and promised not to get mired in Afghanistan, Barack Obama recently sent Congress the largest defence budget since the Second World War: $708-billion for the fiscal year 2011, $82-billion more than for 2010. The total then grew by $33-billion for the 30,000 additional troops Mr. Obama dispatched to Afghanistan.

According to the Stockholm International Peace Research Institute, China’s 2009 military expenditures were $99-billion, Britan’s $67-billion, Russia’s $61-billion and Canada’s $20-billion. As usual, the U.S. military budget is more or less equal to that of the entire rest of the world combined.

And thank the Good Lord for it. It costs a fortune to have a peaceful world and America is not prepared to skimp when it comes to world peace. In The American Way of War: How Bush’s Wars became Obama’s, Tom Englehardt writes that “war is now the American way.” I’m afraid this is seriously misinformed. War has always been the American way. After all, the quest for peace is eternal.

The world should be more grateful. To fulfill this mission, the United States has fought more wars, invaded more countries, supported more tyrants, sponsored more coups, trained and funded more foreign armies, and enabled more massacres than any other country in history. Because peace demanded it, the United States also became the only country ever to use nuclear weapons.

Unlike Canada, the United States was founded in war and soon discovered it was addicted. Couldn’t get enough of it. Alas, one meagre column barely allows space even to list all of America’s wars and interventions since its founding. In every decade since the Revolutionary War, the United States has been militarily involved somewhere on Earth including, for its first century and a quarter, on the North American continent itself.

← Galloway: “Harper is no Jean Chretien”
George Galloway packs the house in Winnipeg →