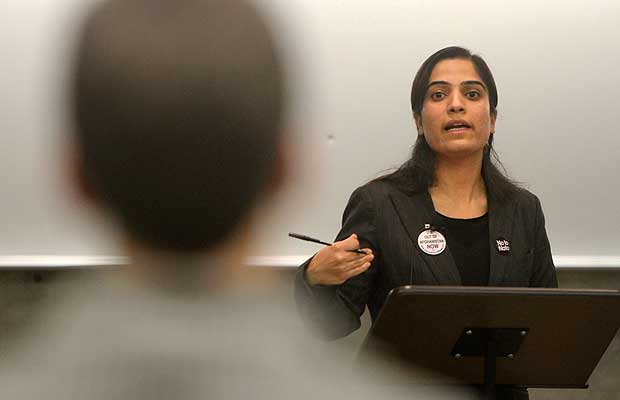 Malalai Joya, an outspoken critic of the war in Afghanistan and the youngest woman elected to that country’s parliament speaks at the University of Calgary on Sunday October 10, 2010.
Photograph by: Gavin Young, Calgary Herald

CALGARY — The youngest woman ever elected to Afghanistan’s parliament told a Canadian audience Sunday that the NATO occupation of her homeland is supporting a puppet government and making Afghanistan a haven for terrorists and drug-trafficking.

Malalai Joya, an outspoken critic of NATO and the U.S. involvement in Afghanistan, was invited to speak at the University of Calgary on Sunday by the Afghan Canadian Students’ Association.

On her first visit to Calgary, the 32-year-old said Afghanistan called on Canadians to support the fight for a lasting democracy in Afghanistan.

“We are in between two evil(s): the warlords and Taliban on one side, and the occupation on the other,” Joya said. “The first step is to fight against occupation — those who can liberate themselves will be free, even if it costs our lives.”