America Threatens Russia: U.S. Consolidates New Military Outposts In Eastern Europe Bases, troops and missiles along the entire length of Eastern Europe from the Baltic Sea to the Mediterranean 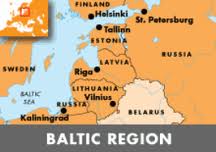 With NATO as intermediary, facilitator and Trojan horse, the Pentagon has established itself – with bases, troops and missiles – along the entire length of Eastern Europe from the Baltic Sea to the Mediterranean.

Two weeks after the United States started its third rotation of the North Atlantic Treaty Organization’s Baltic air patrol on September 1, with the deployment of F-15C Eagle fighter jets operating out of the Siauliai International Airport in Lithuania, neighboring Estonia finished a three-year project to upgrade its Amari Air Base in order to accommodate more NATO warplanes.

The opening ceremony for the enlarged base, which with expanded runways is able to host “16 NATO fighters, 20 transport planes [and] up to 2,000 people per day” [1], was held on September 15.

The Estonian base, like its Lithuanian counterpart, is a Soviet-era one modernized and extended for use by NATO, which financed 35 percent of the expansion.

Defense Minister Jaak Aaviksoo said of the augmented air base that “You could say that it wasn’t just the Estonian Air Force that got a base, but our allies now also have a home, or if you prefer, a nest in Estonia where they can land and rest.” [2] The head of the Estonian Air Force, Brigadier General Valeri Saar, said that NATO aircraft involved in the air policing mission in place for over six years could be stationed at the Amari Air Base in the future.