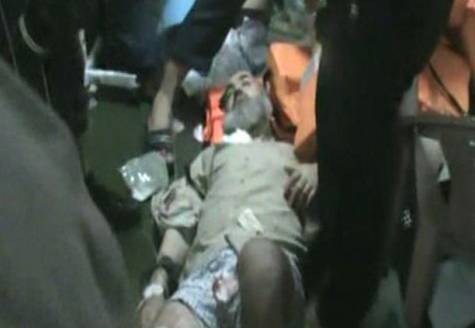 A television grab made on May 31, 2010 from the Turkish TV channel shows an injured human-rights activist onboard the Turkish aid boat “Mavi Marmara,” carrying aid to the Gaza Strip. Photo: AFP

Israel’s shocking and brutal atttack on ships carrying humanitarian aid to Gaza has outraged people around the world. The attack, which took place on the high seas, left at least 19 people dead and many more wounded. Their crime? Bringing desperately needed humanitarian aid to the people of Gaza who have been under an Israeli blockade for the past three years.

In Winnipeg, Peace Alliance Winnipeg, Independent Jewish Voices and CanPalNet, will be holding a demonstration to show our solidarity with the people of Gaza, to express our sorrow at the murder of peaceful activists, and to join hands with people around the world in expressing our outrage at Israel’s actions.

News and analysis about the Israeli attack