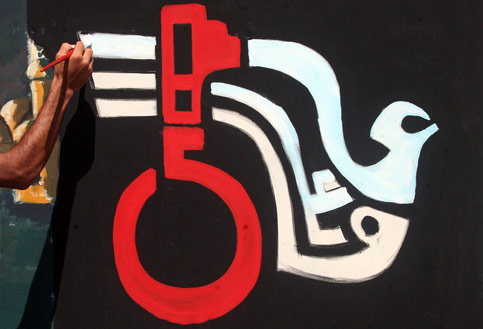 A Palestinian artist paints a mural marking the anniversary of the Nakba in the Jabalya refugee camp in the northern Gaza strip, 15 May 2006. (Wesam Saleh/MaanImages)

May 15, 2010, marks the 62nd year since the start of the Palestinian refugee crisis — currently the largest and longest-standing refugee crisis in the world.

In 1948, Palestinians had their homes and possessions stolen — this, along with their nationality, rights and freedoms. May 15, 1948 was the Nakba (Catastrophe) for Palestinians, and marking this day will continue to be important so long as Palestinians continue to be denied their rights.

Those who oppose Palestinian rights claim that the history of the Israeli-Palestinian conflict is unimportant. Some even go so far as to deny this history and vilify and incriminate those who voice concern about past and present treatment of Palestinians.

Palestinians are not asking for special treatment, or for the denial of others’ rights. The call to remember the Nakba is a call for justice. It’s been 62 years, but it’s not too late for the Israeli government to make amends, for countries like Canada to take action in support of fairness, and for Winnipeggers to take a stand.

The campaign to deny Palestinians’ rights and intimidate human rights advocates has reached frightening new heights. Today, the Israeli government is contemplating fines against groups that fund Nakba commemorations. The Canadian federal government has cut funding to church groups that aid Palestinian refugees. Here in Manitoba, one Member of the Legislative Assembly has proposed a law to ban Israeli Apartheid Week, a campaign to end the abuse of Palestinians’ rights by the Israeli government.

Only with more vocal support for the cause of Palestinian rights and international law can a fair resolution to the Israeli-Palestinian conflict be reached.

On May 14, the Canada-Palestine Support Network is holding an information picket at Broadway Avenue and Osborne Street, followed by 62 seconds of silence to mark continued opposition to 62 years of displacement and denial.

• Commemorate The Palestinian Catastrophe!
• Oppose the Silencing of Palestinians and Their Supporters!
• Stand Up For Human Rights!