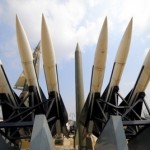 So far this year the United States has succeeded in inflaming tensions with China and indefinitely holding up a new strategic arms reduction treaty with Russia through its relentless pursuit of global interceptor missile deployments.

On January 29 the White House confirmed the completion of a nearly $6.5 billion weapons transfer to Taiwan which includes 200 advanced Patriot anti-ballistic missiles. Earlier in the same month it was reported that Washington is also to provide Taiwan with eight frigates which Taipei intends to equip with the Aegis Combat System that includes the capacity for ship-based Standard Missile-3 interceptors.

The Aegis sea-based component of the expanding U.S. interceptor missile system already includes Japan, South Korea and Australia, and with Taiwan added China would be justified in being apprehensive.

On February 28 the U.S. House and Senate foreign affairs committees permitted the “sale to Taiwan of missiles, helicopters and ships valued at about $6.4 billion” despite weeks of protests from China. “The U.S. Defense Department wants to sell Taiwan the most advanced Patriot anti-missile system….The system, valued at $2.8 billion, would add to Taiwan’s network of 22 missile sites around the country….” [1]

Chinese Foreign Ministry Spokesman Qin Gang recently stated “The responsibility for the current difficulties in China-U.S. relations [belongs] completely to the U.S. side” for failing to recognize and respect China’s “core interests.” [2]

If the proposed placement of U.S. missile shield components in Poland, the Czech Republic, Japan, Australia, South Korea, Alaska and elsewhere were explained by alleged missile threats emanating from Iran and North Korea, the transfer of U.S. Patriot Advanced Capability-3 (PAC-3) missiles to Taiwan – and, as was revealed in January, 35 miles from Russian territory in Poland – represents the crossing of a new threshold. The Patriots in Taiwan and Poland and the land- and sea-based missiles that will follow them are intended not against putative “rogue states” but against two major nuclear powers, China and Russia.

For this and other articles by Rick Rozoff, visit Stop NATO.