Fanning the Flames of Another War in the Caucasus? 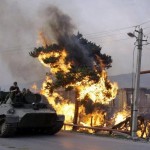 With the collapse of the Soviet Union, the world expected a new era of peace and disarmament. But what happened? Instead of diminishing, US and NATO presence throughout Europe, the Persian Gulf, Afghanistan and Central Asia rapidly increased, and the world experienced one war after another — in the Caucasus, Yugoslavia , Iraq and Afghanistan , each one hotter and more horrible than the last. And we are far from seeing the end to the savagery now unleashed by the anti-communist jinni.

Though a pokey backwater for the past millennium, the south Caucasus is now a key battleground, the “critical strategic crossroads in 21st century geopolitics”, writes analyst Rick Rozoff, the focus of ambitious energy transit projects and a military corridor reaching from Western Europe to East Asia, controlled (or not so “controlled”) from Washington and Brussel.

Surely peace in this vital region should be a paramount goal for both Russia and the West, for their own reasons — Russia because, well because it is there and its cultural and economic links are vital to Russia ’s well being. The US, if only to benefit economically, since peace everywhere is a boon to economic well being and logically should be blessed by the world’s superpower, whether or not it is a benevolent one.

But this logic has been betrayed — egregiously, in the case of US abetting Georgia in its disastrous war against Russia in 2008, less obviously in likely covert US and other involvement in Chechnya and its neighbours, as well as in the Armenia-Azerbaijan stand-off over Nagorno Karabakh.