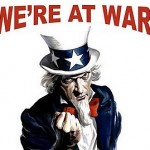 Here is news of the Third World War. The United States has invaded Africa. US troops have entered Somalia, extending their war front from Afghanistan and Pakistan to Yemen and now the Horn of Africa. In preparation for an attack on Iran, American missiles have been placed in four Persian Gulf states, and “bunker-buster” bombs are said to be arriving at the US base on the British island of Diego Garcia in the Indian Ocean.

In Gaza, the sick and abandoned population, mostly children, is being entombed behind underground American-supplied walls in order to reinforce a criminal siege. In Latin America, the Obama administration has secured seven bases in Colombia, from which to wage a war of attrition against the popular democracies in Venezuela, Bolivia, Ecuador and Paraguay. Meanwhile, the secretary of “defence” Robert Gates complains that “the general [European] public and the political class” are so opposed to war they are an “impediment” to peace. Remember this is the month of the March Hare.