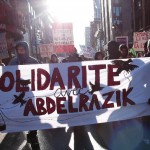 This is the March Call to Action in Project Fly Home’s six-month campaign leading up to the first anniversary of Abdelrazik’s return to Canada. Video and audio from February events are included below.

THIS MONTH, PROJECT FLY HOME ASKS ALL SUPPORTERS TO:

1. Join the postcard campaign: send a postcard yourself and distribute postcards to others in your networks.

-> To order postcards, email us at projectflyhome@gmail.com

-> Download postcards and flyers for the campaign here: www.peoplescommission.org/en/abdelrazik

2. Publish articles related to the campaign in local, campus and alternative media.

-> Get in touch with us for ideas for articles and information on how to get published: projectflyhome@gmail.com

Please don’t forget to send us your published articles.

CHECK OUT AUDIO AND VIDEO FROM FEBRUARY EVENTS:

1. BLACKlisted Then and Now: Linking Histories of Racism and National Security in Montreal (Montreal, 24 February 2010):

Project Fly Home and the Alfie Roberts Institute organized an excellent panel discussion for Black History Month featuring David Austin of the Alfie Roberts Institute, Khalid Elgazzar (legal counsel for Abousfian Abdelrazik) and Maria Forti of Project Fly Home. Austin described how black organisers working in Montreal in the 1970s had been put under surveillance for political reasons and later infiltrated by an RCMP officer who incited violence. When this and other RCMP abuses became public, it sparked a public outcry which lead to the creation of CSIS.

Abdelrazik was invited to testify before the Foreign Affairs Standing Committee in Federal Parliament about life under the 1267 list. Abdelrazik explained that the listing had been used to delay his return to Canada for four years and described how it had affected his daily life since he returned to Canada; for example the Royal Bank of Canada refused to open a bank account for him on the grounds that he is on the 1267 list. Amir Attaran, a law professor at Ottawa University, also testified as an expert on the 1267 regime. He argued that describing it as an unjust legal regime is to give it undue legitimacy – it is best understood as a diplomatic regime which serves political purposes. Attaran called on the government to immediately repeal domestic regulations implementing 1267 in Canada.

TO GET INVOLVED WITH PROJECT FLY HOME IN MONTREAL:
projectflyhome@gmail.com

To add your organization to the list of groups endorsing Project Fly Home’s six demands, please read the sign-on statement
www.peoplescommission.org/files/abousfianMedia/ProjectFlyHomeSignOn.pdf and email your organization’s name in English and French to projectflyhome@gmail.com.

← U.S. to press for Canada to keep troops in Afghanistan
In Iran visit, Lula hopes to prevent Iraq war ‘mistake’ →