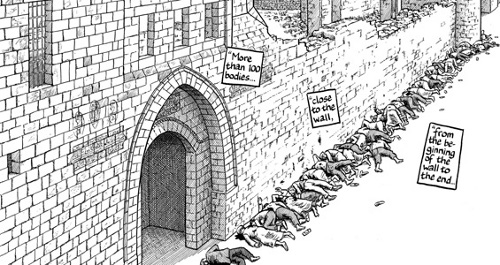 When it comes to the world of cartooning, Joe Sacco is considered a luminary. Sacco, who is hailed as the creator of war-reportage comics, is the author of such award-winning books as Palestine and Safe Area Gorazde.

His latest work, Footnotes in Gaza, is an investigation into two little-known and long-forgotten massacres in 1956 in the southern Gaza Strip that left at least 500 Palestinians dead. It is a chilling look back at an unrecorded past and an exploration of how that past haunts and shapes the present – including the beginning of mass home demolitions in 2003 in Rafah.

Sacco navigates the fuzzy lines between memory, experience and visual interpretation almost seamlessly all while painting an intimate portrait of life under occupation and in spite of occupation – a life not only of repression and anger but one full of humour and resilience.