Leave Afghanistan to the Afghans 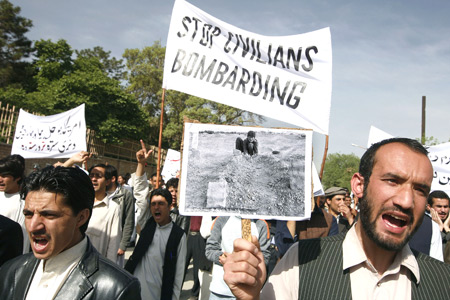 Students of Kabul University, one holding a photo showing graves of Afghan victims killed in airstrikes, shout anti-U.S. slogans during a demonstration against coalition airstrikes in Farah in May, 2009. Photo: Sadeq/AP

The US is poised to send tens of thousands more soldiers to the country. The nature of the conflict is changing. What should be a war in which the Afghan government fights the Taliban has become one which is being fought primarily by the American and British armies. To more and more Afghans this looks like imperial occupation.

In disputes in Washington and London about sending more troops it is seldom mentioned that Afghans are against the deployment. Contrary to western plans, just 18 per cent of Afghans want more US and NATO/ISAF forces in Afghanistan according to an opinion poll carried out earlier this year by the BBC, ABC News and ARD. A much greater number of Afghans, 44 per cent, want a decrease in foreign forces in Afghanistan.

In the light of these figures, it is hardly surprising that the Taliban have been able to win support. The cruelty of their rule before 2001 is becoming a distant memory. They are successfully portraying themselves as the defender of the country against foreign occupation. Matthew P. Hoh, the senior American civilian representative in Zabul province east of Kandahar, resigned last week because he had become convinced that the US military should not be in Afghanistan. A former US Marine officer who served in Iraq, he says in his resignation letter that the US has joined in one side in a 35-year-old civil war between the traditional Pashtun community and its enemies. “The United States military presence in Afghanistan greatly contributes to the legitimacy and strategic message of the Pashtun insurgency,” he says. “In a like manner our backing of the Afghan government in its current form continues to distance the government from the people.” He says that most of the insurgents fight again the presence of foreign soldiers and not for the Taliban.

← Does Judaism equal Israel? A Jewish Theologian Speaks Out
Malalai Joya packs the house in Winnipeg →