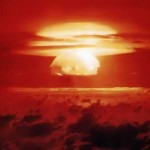 One day in the spring of 1961, soon after my 30th birthday, I was shown how our world would end. Not the Earth, not—so far as I knew then—all humanity or life, but the destruction of most cities and people in the Northern Hemisphere.

What I was handed, in a White House office, was a single sheet of paper with some numbers and lines on it. It was headed “Top Secret—Sensitive”; under that, “For the President’s Eyes Only.” . . .

The deputy assistant to the president for national security, my friend and colleague Bob Komer, showed it to me. A cover sheet identified it as the answer to a question President John F. Kennedy had addressed to the Joint Chiefs of Staff a week earlier. Komer showed it to me because I had drafted the question, which Komer had sent in the president’s name.

The question to the JCS was: “If your plans for general [nuclear] war are carried out as planned, how many people will be killed in the Soviet Union and China?”

← A boost for American war resisters in Canada
A Deserter’s Tale: Joshua Key’s story of horror and hope →