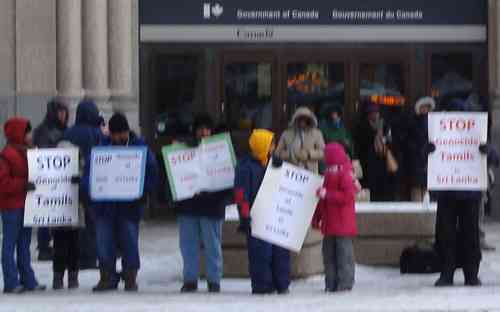 On Feb. 4, 75 Winnipeggers defied bone chilling temperatures and freezing winds to demonstrate their support for the 250,000 Tamil civilians who are endangered by Sri Lankan military attacks on the Tamil Tigers.

The Winnipeg vigil was held in concert with similar events in held in Ottawa, Montreal, Toronto, Edmonton and Vancouver to urge the Canadian government to take decisive action to help end the unfolding humanitarian crisis.

R. Sri Ranjan sent us a picture and this brief report:

Despite the minus 24 C cold and blustery day, about 75 people came for the event with placards. We were on Main Street near the Windiest Intersection.

We caught the office traffic and everyone honked to show their support. People stopped by and said they had never heard about the crisis and asked how they could help.

We passed on the CTC Event Brochure and asked them to call/email their own MPs and urge our government to stop the genocide. The CBC came to video the event and interviewed me and it was aired on the 6 o’clock news. The Winnipeg Free Press came and took photos published a photo with a caption about the vigil on Feb 5th.

Normally, people cannot stand outside for more than 10 minutes under this type of weather. However, the people stood there as planned with the children taking turns to warm their feet in near by cars.

For information on how you can help, visit the site of the Canadian Tamil Congress.